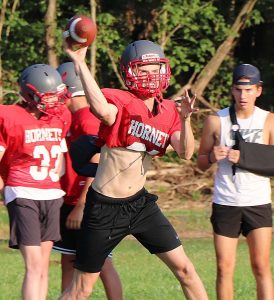 Football action is just around the corner and the Hancock County Hornets are working hard in preparation for another great season on the gridiron! The team will open the 2021 season at home against rival Breckinridge County on August 20.

The Hornets have been practicing every day and are set for a scrimmage at Grayson County on August 6.
Hornet head coach Bobby Eubanks likes what he’s seeing from his charges.
“We’re starting to hit a grove now that we’ve got everybody back from vacations and other sports.

Thirty-eight players have come out for football this year, including five seniors.
“We’ve got good leadership from that core group and our junior class is a large group so we’re excited,” the coach said.

The team participated in 7 on 7 passing drills at Apollo a few weeks ago.
“We competed and did well there,” Eubanks said.

The Hornets have been and are still utilizing a run based offense, but they showed last year that they can also beat teams through the air. Quarterback Cole Dixon threw six touchdown passes in 2020, including the game winner at Todd County when Kaleb Keown hauled in a one-handed grab in the end zone.

“Like we always say… we want to take what the defense gives us, but we have some weapons with Cole being able to throw as well as he does, and we have some great targets in Kaleb and Austin Volocko.
“If teams load the box we’re going to try to get the ball outside and throw down field,” Eubanks said.

The team’s staple offense is it’s running game. It has been and will be for the foreseeable future. Eubanks’ teams will attack the inside or outside with strength and speed and they have key players returning.

“Logan Willis is coming back for his second year as our fullback and Alex Basham is coming on as another player who will run for us. Those guys along with Noah Mize, Aiden Weatherholt and Cole can really pull the ball down and make big runs for us,” the coach said. The success of any offense is predicated on the quality of its play on the line of scrimmage.

The Hornets look to have a solid offensive line again this year.

“We lost some key guys (to graduation) but I feel like, with what we have back, we’re going to be really strong,” the coach said. “Our guys have worked hard through the off-season to get stronger and faster.

This will be one of the fastest groups of linemen that we’ve had so we’re really excited about that.”Christian Richards, Jake Frames and JT Richards will start on the line, with returning starter Jack Duncan possibly moving from center to tight end. Several other players are still competing for possible starting positions as we near the start of the season.

Defensively, the team will have to replace the likes of graduates Luke Garrison and Darian Clay.
“You can’t really replace guys like them, but we’ll fill in the best we can and make the best of it,” the coach said. “We’ve got some younger guys who are really wanting to step up and take on those rolls. We have a good competitive group that really wants to do well.”

The Hornets finished with a 6-2 record during the shortened 2020 season. The campaign was highlighted by a 30-29 win over Owensboro Catholic last October.
“We going to ride the momentum from last year and keep on going.”