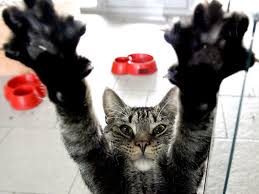 My niece owns a cat she named Loki, and the cat more than lived up to its name Loki. When it comes to food, all of the food in the house belongs to him, or so he believes. He thinks of the house as his kingdom, and the people in his house as his subjects and people eating food as thieves taking food from him.

When Loki sees someone eating food he has the attitude of ‘that lowly human is eating my food. I must go down there and exert my authority to show him the error of his ways!”  He is known to aggressively confront a person eating food, going so far as to smack a person’s hand and take the food.

When he does this, my oldest niece talks to him, tells him he is the man of the house and he must behave like a gentleman and not be aggressive. The words fall on deaf ears; they are like his food, in his mouth and out his butt!

A few years back when I visited my sister for a week, Loki and I encountered a difference of opinion on who actually owned a plate of food. I sat down at the table with a plate of food, Loki noticed me and jumped onto the table and started hitting me with his paw as hard as he could in an effort to get my food.

I could not believe he tried to strong arm me for my food, especially since I am well over 200 pounds heavier than him, and not the least bit intimidated by his antics.
I relocated him to the floor with a backhand to his face! Needless to say, he was shocked. No one ever dared to challenge him over food.

My oldest niece was not happy I slapped the cat, and said, “We do not hit cats in this house!” I looked at her and said, “When a cat attacks me first, I defend myself. He hit first.”

Loki actually belongs to my youngest niece, and she saw the entire exchange, and came to my defense. She pointed out that Loki did indeed attack me first.

Now for the rest of the story.

When he saw it was me with the plate of food, it was like he hit a wall face first. He stopped so fast his butt basically hit his head! He stopped in the middle of the dining room and sat there and watched me eat.

I ate nearly all of my food, but did have a little left. So, I went over to Loki, sat the plate down in front of him and let him have the scraps. I told him, “Since you behaved, I am letting you have the leftovers.”

That was our routine the entire week I was there. He sat in the floor and watched me eat, but did not try any aggressive tactics to get my food.