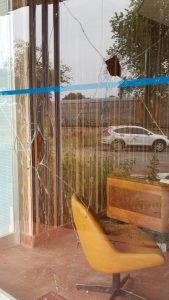 In early June of this year an unknown number of vandals broke into the former Dal-Tile office building located at 655 Melanie Drive in Lewisport, and stole several items. The thieves stole a Great Circle brand wood chipper, as well as lots of copper wiring and piping. Dave Taylor and his sister Georgia own the building.

“I got a call from Greg Linn on June 24 telling me the building my sister and I own had been broken into two weeks earlier,” Taylor said. “Apparently it took two weeks to tell me it happened because they were unsure who owned the building, and originally had approached someone else they thought owned it.”

“I love the look of it,” Taylor said. “My sister and I think it will be a great addition to the community once it is restored and put back to use.”

Taylor said earlier this year authorities caught a group of kids throwing rocks through the glass windows. He thinks either those kids or someone else slipped though the broken windows and opened the doors from the inside. Once inside, the thieves helped themselves to items stored inside the building, plus the copper metal in the wiring and pipes.
“They also apparently planned to steal my Honda mower because it was found outside stashed in some weeds,” Taylor said.

“I guess they were planning to come back for more copper too because some of it was cut and set out to be picked up later,” Taylor said. “They must’ve gotten interrupted.”

Taylor said he worked hard to refurbish the building after he and his sister purchased it last year. He cut down trees, cleared out the overgrown landscaping and getting the utilities to the building in proper working order.

Work stopped on the building when he contracted COVID-19 in November. He is currently battling stage four cancer, which also prevents him from working on the building.

“It is disheartening because we bought the building to save it from deteriorating even more or from being demolished,” Taylor said. “Apparently with the trees cleared away it’s more visible and more of a target.”

Taylor said the security lights are to arrive this week, and he ordered security camera. In retrospect, he thinks maybe he should have installed them earlier.
“I just believed that people would see that I was trying to work on the place and would not vandalize it or steal from us,” Taylor said.