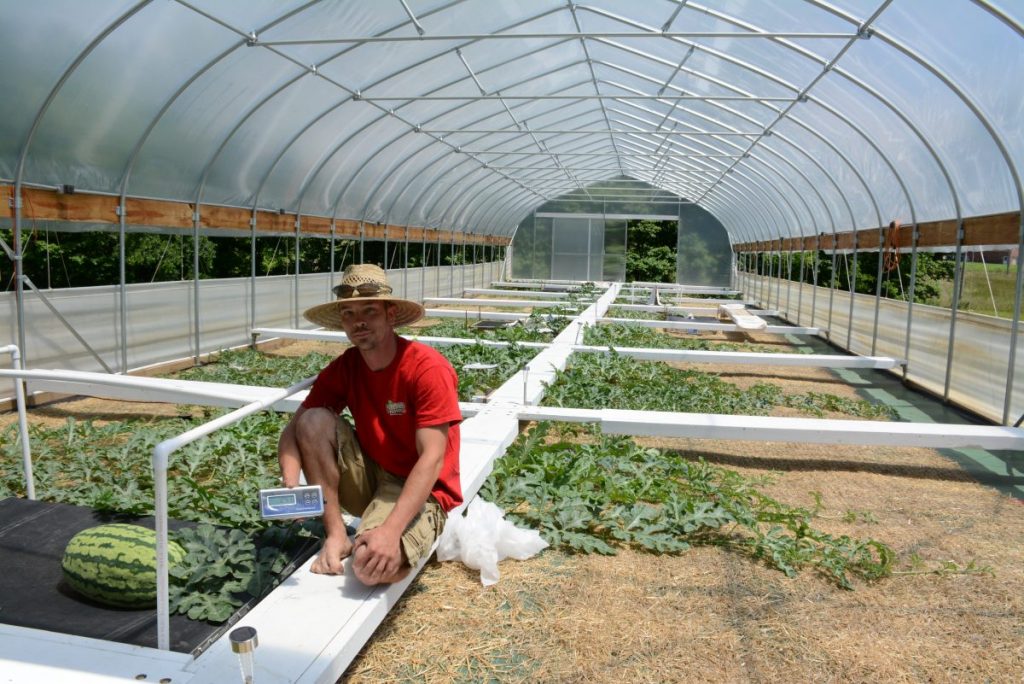 Nick McCaslin spends hours every day in a small structure behind his house, far away from prying eyes, mixing a myriad of ingredients and studying them in a microscope in the hopes that he can build the perfect monster. He’s like a modern day Dr. Frankenstein, only the monster he’s creating is a monster watermelon, and he’s determined to set the world record for the biggest ever.

He’s already in the Guinness Book of World Records for the heaviest cantaloupe, which weighed 67 lbs and 1.8 ounces in 2019. www.hancockclarion.com/2020/08/26/a-watermelon-win/

Now he’s trying to grow a watermelon to surpass the current record of 350.5 pounds.
“The world record was set in 2013 and ever since then nobody’s even got close to the world record,” McCaslin said.

At just 28 years old McCaslin is younger than most of the other growers but he’s already moved on from other competitive activities, like the softball teams he was on that played for national titles in places like Florida.

“If I’m going to do something I want to be good at it,” he said. “I used to play competitive softball and my body got where it didn’t like all the beating it was taking. This is a good way for me to still be competitive and do something that I like to do.”

His youthful competitiveness, plus the added advantage of still being single, mean he can pour as much of his time and efforts as he wants into growing monster melons.

No grower has gotten within a pound or two of the world record since it was set in 2013, which McCaslin said is because they’re all trying the same things every year and not trying anything new. Still being young and not yet set in his ways, he’s trying out a new way to try to do what’s never been done.

“You hear a lot of old timers, they talk about make sure plant your potatoes on Good Friday. That’s a good rule of thumb,” he said, “but I’m more along the lines of I’m not guessing. I want to know what I’m doing at all times.
“This year I’m going about things polar opposite of normal,” he said. “… I’m going all organic.
He’s avoiding all chemical fertilizers and even avoiding using any material that’s been within a mile of land that’s using chemicals.

“Chemical fertilizer is kind of like crack cocaine,” he said. “You give it to a plant, it reacts in a certain way (but) you’ve got to keep adding more and more and more because it’s building a resistance to it.”

He’s had to become sort of a scientist, something he never imagined he’d do.

“I honestly never paid a lick of attention to biology until it applied to what I was doing,” he said.
To catch up on his knowledge he read old biology textbooks and it turns out he likes the subject after all.
“Biology’s my thing,” he said.
And biology is what he’s counting on to grow a world-record watermelon.

For guidance, he looked to nature.

“Take the Hoosier National Forest, for instance. Who went out there and fertilized them trees and made them so big and so pretty?” he said. “How’d they get that big? It’s got to be naturally done. So what’s making them trees grow? That’s what’s got my brain turning.”
So he’s bringing those growing environments to his watermelons, both literally and figuratively.
“Basically I find a couple of trees that I really, really like that are healthy,” he said.

He takes some of the soil from around the tree and brings it home, looks at it under a microscope, and gives it to his melons.
“If I see a certain diversity of biology I’ll keep that, I’ll harvest it and then I incorporate it into my watering system or I’ll spray it on my leaves,” he said.

His watermelons are grafted onto the root system of gourds, which are hardy and resistant to disease, but he doesn’t just plant melons and hope for the best.

He’s intensely detail oriented and leaves no variable to chance. He extracts calcium from the rib bones of a pig using his own distilling process, uses collected water he filters himself, built a wood framework on the floor of his greenhouse to make sure no one steps on the dirt, and monitors the handpicked most promising melons multiple times a day, which now spend their growing lives on scales.

“I write down my weights every day, the temperature, humidity, wind direction because that’s important,” he said. “Basically anything you can think of I write down in a book. I even check the Ph of my water.”

McCaslin has already proven he has the ability to grow world record melons, which could win prize money at any competitions he chose to enter, but he’s not focused on being good or winning some cash, he simply wants to be the best.
“I don’t care about the money, I just want a world record,” he said.