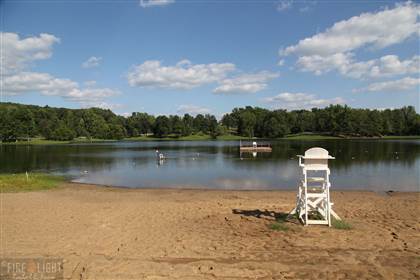 After being closed for over six years, Hancock County Fiscal Court voted last month to open the swimming area at Vastwood Park for the summer.

The beach opens this coming Monday for Camp Vastwood, and is open only for the attendees of the camp the first four days. Camp Vastwood serves as a trial run for the beach staff before the opening to the general public on June 25.

Camp Vastwood runs from Monday, June 21 to Thursday, June 24. The times are 9 a.m. to 3 p.m. Activities include crafts, swimming and even inflatables for the kids.

The county closed the lake to swimming for a couple of reasons.

According to former Hancock County Judge/Executive Jack McCaslin, one of the reasons the county closed the lake in 2015 was due to the growth of invasive weeds in the lake, and the other being not many people swam at the lake. McCaslin said the weeds growing in the lake made it difficult for people to swim without getting tangled up in them.
“When we got seaweeds in the lake, no one was going to swim in it,” he said. “We fought that mess. It would go away for awhile, then come right back.”

Part of the problem causing the weeds to grow so thickly was the clarity of the water. In an April 9, 2015 article by Dave Taylor, fisheries biologist Jeremy Shiflet, with Kentucky Fish and Wildlife, said visibility in the lake needed to be between 18 to 24 inches.

At that time the water was so clear that sunlight penetrated to the bottom of the lake, allowing the weeds to receive enough sunlight to grow thickly.

To combat the problem, the county contracted with a company to treat the lake with chemicals that darkened the water. While the chemicals helped darken the water, and eliminate the weeds, it made the water unpleasant for swimmers.

“As long as we had chemicals in it, we did not feel it was safe to swim in,” McCaslin said.
The other reason the county closed the lake was financial. McCaslin said it was not cost effective to keep the lake open.

The question of swimming also affects people renting campsites at the lake this summer.

Roberts said workers at the park would be tasked with asking campers to get out of the water when they notice them swimming in the lake when it is closed.

Roberts said the company told the county it does not need to treat the lake each year. He said the company plans to continue to monitor the lake and make recommendations on what treatment options the county needs to do to keep the lake healthy.
“When we do a chemical drop, there is no swimming in the lake for 24-hours after adding the chemicals,” Roberts said.