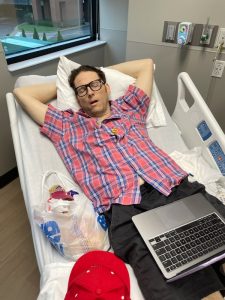 I told my girlfriend Jamie to get pictures of me working during my chemo treatment Monday but that I didn’t want them to be posed. I didn’t get much work done and she got a picture of how the day really went.

This third round of chemo has been rough and the main thing keeping me from sleeping all day is frequent vomiting, so what better time for a little rant.

We need to stop making men feel bad for being sick.  Men are taught to be tough and brave, both of which are fantastic traits that I’ve embraced. Who doesn’t want to be tough? Why would I not want to be brave? The problem is I and other men apply those same lessons to our healthcare, meaning we’ll do whatever it takes to never admit the weakness of being ill.
Looking through old medical bills recently I came across one from an emergency room visit from when I had eight straight days of hiccups during COVID-19, which morphed into short seizures of my chest where I couldn’t breathe for about four seconds each time. I looked at the nearly $1,000 bill from that visit and remarked at what a useless visit it had been.
In fact, that visit was the reason I pointed to for avoiding going to another ER, or even another doctor for a while.
I left that visit with a prescription for medicine I already had, but more so with a bad taste in my mouth. It was there that a male nurse or doctor walked in to the room where I was waiting, looked at me incredulously and sarcastically said, “So you didn’t go to work because you have the hiccups?”
He reinforced my existing thought that it was such a childish, foolish reason to be at an emergency room.
Telling people I was in bad shape because of hiccups was always embarrassing, as if I had to tell people I’d had a terrible pogo stick incident or that I’d gotten a jelly bean stuck up my nose. But the thing is I really was in bad shape. I couldn’t sleep and I was delirious, I was continuing to lose weight, and things were getting worse.
I finally went to get help for it and I was greeted with snark and a subtle jab at my masculinity. It’s no wonder men refuse to go to the doctor.
Of course now I know that those extreme, very odd hiccups were either caused or exacerbated by the cancer that was turning my esophagus to ground beef and spreading elsewhere, but it’s too late to tell that guy now.
When I spent months immediately after that unable to swallow most foods, I attributed it to those hiccups and some presumed damage they caused. I also rebuffed any notion of going to a doctor and I specifically referred to that guy making me feel like an idiot.
Things had to get very, very bad for me to finally relent and see another doctor, this time finding out about the cancer.
Now I’m too weak to be a tough guy.
I have no good or helpful ideas for any of the things I’ve complained about here, which would annoy me terribly if I weren’t the one writing this. I do know though, that if it had been up to me I would’ve refused help until it killed me, and it took two women, my girlfriend and my sister, to push me toward the help that I’m getting today.
Now I must go be sick, which is OK.
By Dave Taylor
dave.hancockclarion@gmail.com
Posted in News and tagged COVID-19, Dave Taylor, medical bills, Stage 4 cancer, third round of chemo