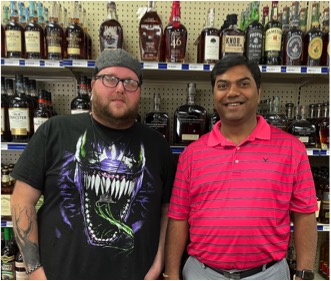 If you haven’t already noticed the new liquor store in Lewisport, you might want to take another glance when passing Jumpin Jacks Truck Stop at the intersection of Highway 60 and 4th street.

The new store is located next to Independence Bank. Paul Patel, manager of Lewisport Liquors, manages the liquor store as well as the gas station and mini market at Jumpin Jacks. “Many people still don’t know the liquor store is here,” said Patel. “Even though we’ve been open since December 22nd.”

The store has a good variety of spirits, carrying mostly top brands. If they don’t have what you’re looking for you can request a special wine or any kind of spirit and they’ll do their best to accommodate.

“We carry everything and as customers are coming in they’re also requesting; because in every area and in every town, people have different choices,” said Patel. “We always try to get the requests in if they are supplying in Kentucky.

I have a lot of people asking me lately for French Lick wine, and I’ve been asking all my suppliers and I haven’t found who carries it yet because they’ve got three or four different suppliers. Like everybody, people like a certain brand and they want to stick with it.”

Regardless of a few delays, the store offers wines and tequilas and a very good selection of bourbon, rum and vodkas. “We are also planning to get beer,” said Patel. “We have the license but we’re just waiting for our beer keg people. With this pandemic it’s been really put behind, so we’re still waiting but we are planning to get beer over here.”

Patel said the pandemic has made it hard to find people willing to work, as they’re making more money staying home on unemployment. “That’s pretty much everywhere. I know a lot of places even closing because they cannot find the people,” said Patel.

“We still haven’t put the signage out on the road and stuff, and the owner, Steve Patel, has been so busy with his other store in Whitesville and also with one in Louisville, he cannot come over here much to work right now and that’s putting us somewhat behind too; but he’s doing the best he can.”

Even though the new business is picking up slowly, Patel says the local people have been very good to them. “In the gas station business I’ve been here managing for almost 10 years and the owner has been here since 2007 and he’s been pretty successful, so I’m sure we will be successful here too. Just keeping it positive,” he said.