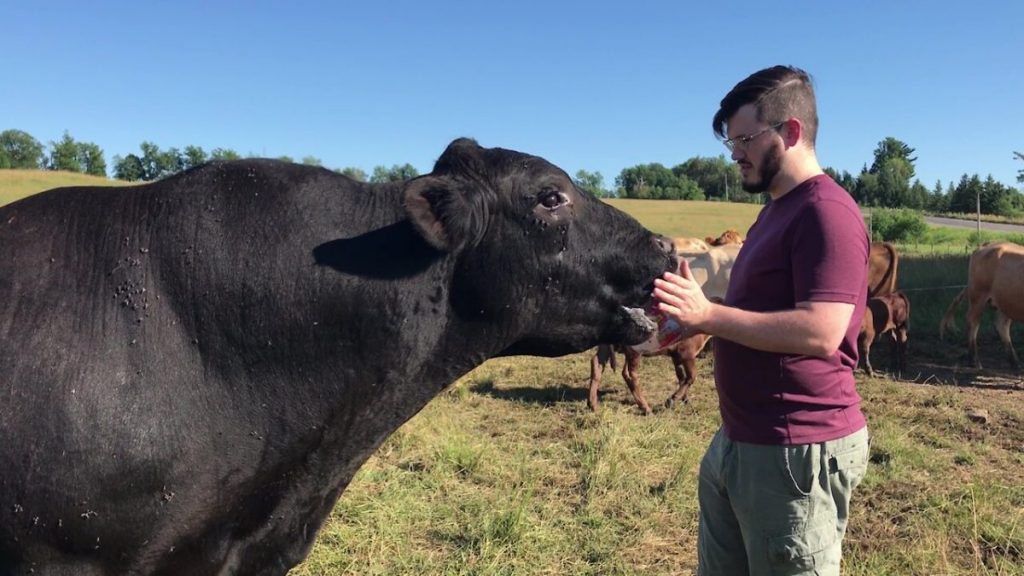 When the calves were born that spring, my grandfather, before he became sick and passed away, decided we were going to sell all of the calves later that spring. So, we went to the Southern States farm store in Hardinsburg and bought a bag of feed and I started feeding the calves. We actually repaired an old pen on the side of the barn and used this area to feed those calves. If memory serves correctly, there were nine calves, including one calf so small that he could walk under the bottom strand of barbwire between fields without touching the wire. Due to his small size, we created a special area in the pen just for him to keep the other calves from shoving him away from the food.

I would herd the calves into the pen each evening and feed them a 5-gallon bucket of the “soft-feed” (my grandfather’s term for it). When I first started feeding the calves, I was quite a bit taller than the calves. The calves grew quickly, and it was a very wet spring. It did not take long for the ground in the pen to become a huge pit of mud about one-foot deep. In fact, it soon was deeper than my gumboots I wore when feeding the calves. The combination of the deep mud and quickly growing calves created a situation to where I was barely taller than the calves.

Each evening when I fed the calves, I spoke to them and would touch and lean on them as I made my way along the feed trough. They became used to my presence and my leaning on them, so I decided to change my tactic when I fed them. One day instead of getting down in the mud with the feed, I actually climbed upon the side of the pen and stepped out onto one of the calves’ back and poured feed. The calf did not move; she just started eating the food. I stepped over onto the next calf and the same thing happened. I walked on the backs of all of the calves as I poured out the feed. I just repeated this step each day, and the calves did not mind one bit.

A few months after my grandfather died the day came to take the calves to market. It was a sad day as I had grown attached to the calves, and they were the last group of calves born prior to my grandfather’s passing. The calves walked down from the truck just fine, and walked part way up the entrance chute when the little bull, I think I named him Mighty Mite, turned crossways of the chute and refused to move. After trying everything I could think of to get him to move, I climbed into the chute which startled all the farmers there, and walked on the back of my calves to where Mighty Mite stood. I pet and rubbed his head, talked to him and even tried to push him, all while sitting on the rump area of Knothead. I finally got him to move, and as Knothead walked up the chute, with me sitting on his back, I spotted a place where I could exit, stood up and simply climbed onto the side of the chute.

When I did, I came out beside on older farmer that came to the stockyards that day to buy cows. Being an older gentleman, he was looking for gentle cows. He asked me if the calves always let me walk on them, and I told him the story about how I had gentle cow them and how I conditioned them to let me walk on their backs. He then walked away, and I thought nothing more about it.

After the calves were placed in a pen, I went over to where they were to keep them company, and to also say bye to them. About that time the stockyard workers started to take the calves out of the pen. I asked him what he was doing, as the sale had not even started yet, and he said them had been bought. I asked him who bought them, and he pointed out the buyer. It turned out to be the old farmer I had talked to about them. He bought all nine of the calves! He then told me he did not plan to buy that many, but when he saw how gentle they were he decided to take them all.

I had also told the gentleman about my grandfather passing, and how there was a strong sentimental attachment I had with the calves, and my biggest fear that day was that a slaughterhouse was going to buy them. The farmer told me he planned to give them a good home for many years, and that none of them were destined for the slaughterhouse. While I was sad to see the calves go, I was glad they went to a good home. Oh, and I also told the farmer about how Knothead loved to have his neck rubbed, and that he would nudge you and drop his head to be rubbed.