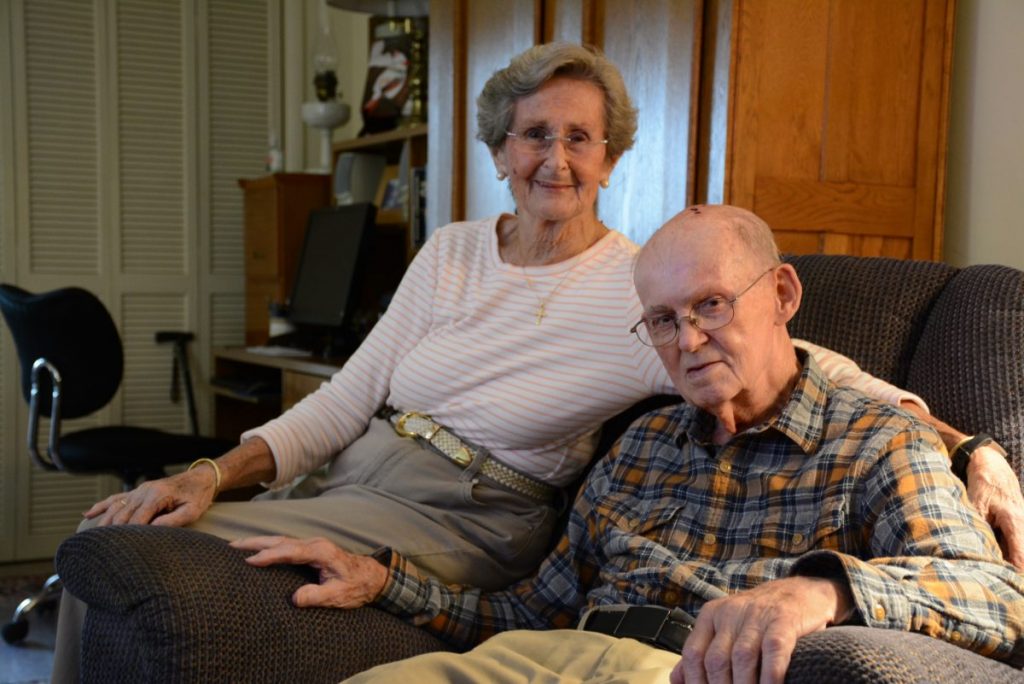 Betty Greathouse grew up in Lewisport and attended Lewisport Consolidated School. She graduated from high school in 1953. She and Frank were married in 1957. She attended Kentucky Wesleyan College one year and then began work as a legal secretary.

They have four wonderful daughters: Stephanie, Annette, Jennifer and Suzanne.

She and Frank were married at the old Methodist Church, in Lewisport. It was raining that day and people had told them it was said to be a good sign and meant that they would “stick together.” It has certainly turned out to be true for them, as they will be celebrating their 64th wedding anniversary in August.

She has many good memories of growing up in Lewisport. She took a trip with her mother on the train to see her older brother and his wife, in Louisville. She visited again a couple of years later, when she was around 7-years-old and traveled solo. They had a relative working on the train, a conductor, who watched out for her. She was to meet her brother’s wife at the station.

Betty said that she “didn’t get to take too many trips like that.” But, she really enjoyed them. Except for the part of the trip on the way to Louisville, where there was a bridge and if you looked out the window, you could only see water. She hid her face for that part.

Betty’s father was in the Spanish American War and when he came home, he had Malaria. Betty’s mother cared for him. She said that he loved Teddy Roosevelt and his “rough riders.”

Betty attended KY Wesleyan for a year and at the second semester was hired as a legal secretary for Wells Lovett. She began working for him for about a year and became pregnant and worked full-time until May before Stephanie was born in June. After that, she worked part-time for several years and didn’t return to full-time work again until after Suzanne, their youngest was born. She went  to work full-time for Thacker, Thacker & Bickel and retired 30 years later.
Frank worked at W.R. Grace (now Daramic) for 30 years. He graduated from Wesleyan and also got his Master’s degree in Evansville.

Betty worked at the Clarion for a short time in the 1950s as the typist. She was City Clerk for the City of Lewisport and she continued to do some legal secretarial work, even after retiring.
Betty said that she was very blessed to have two wonderful grandmothers around while she and Frank were raising their children. They always watched the children for them when they needed it.

Frank and Betty have been members of Lewisport United Methodist Church for close to 80 years now. Betty and her daughters played on the women’s church softball team. Frank was umpire for the men’s team for some games as well. All of the churches in the area played each other. Betty said that it was “the best time.” Everyone enjoyed it and the sportsmanship made for stronger bonds.

They have been on several mission trips. One was after Hurricane Katrina. Betty, Shirley Roberts and Yvonne Taylor cooked meals and had them ready for the workers. There were many groups there from different churches, along with Wesleyan students and others. “It was an experience for all of us,” Betty said.

One trip that Betty and Frank took as a vacation with a group, was to Oberammergau, Bavaria Germany to see “The Passion Play.” She said, “It was one of the most wonderful experiences that we had…an absolutely wonderful play…not like anything else.” The play has been performed every 10 years since 1634 by the inhabitants of the village of Oberammergau.

They feel truly blessed to have such a wonderful family. “It’s been a fun ride for all of us,” Betty said, “ We’ve been through difficult times, but it always works out.”

She has been enjoying painting for 7-8 years now at Debbie Atwell’s art studio. She had never picked up a paintbrush before. “I enjoy doing it,” she said. They listen to soothing music and talk while painting together. She has painted all of her family members a picture. She is working on a painting now of geese in winter. It is from a photo that was in the Clarion.

“I couldn’t ask for a better family,” Betty said. She and Frank also have several grandchildren that they adore: Kaitlin, Peyton, Jesse, and  Martha. They are so proud of all of them.

They have taken a vacation to the beach every year with their entire family for over 50 years, beginning when Stephanie was a baby and continue to this day.