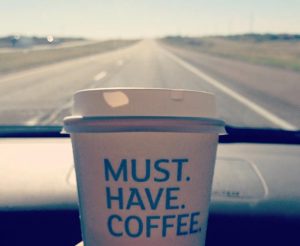 I usually stop at Jumpin Jacks in Lewisport each morning to buy a cup of coffee. The store offers a reduced rate on its coffee if customers bring back their cups, so I keep a couple on hand. I usually have more than one because I often forget to put the cup in my car for the next morning.

When I left work a week ago Tuesday I grabbed the two cups on my desk and headed to my car. The wind was blowing quite hard when I left work, and I had the lids just sitting on the top of the cups instead of securely pushed down. I locked the door at work as I left and turned around to go to my car.

At that moment a gust of wind caught one of the lids and blew it off the cup. It landed on its edge standing up, and started rolling south down Main Street toward the intersection with Main Cross.

When it first started rolling, I thought it would roll a few feet and quit; instead it just kept on going. I watched it roll straight toward the intersection. I became curious on how far it would roll, so I stood there and watched it head down the street.