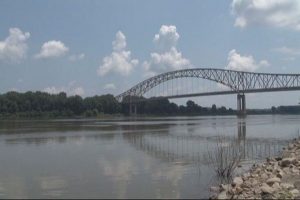 Hawesville’s river-adjacent residents could be a little safer soon if the city is awarded a nearly $800,000 grant through the Federal Emergency Management Agency to redo its levy.

Blake Edge, from Green River Area Development District, told the Hawesville City Council during a special called meeting Tuesday that the city has been approved to apply for a hazard mitigation grant through FEMA, which would replace equipment that had been deemed “marginally acceptable” during a certification process all the way back in 2011.
“We submitted a project to replace all the pumps and the electrical components at the pump station at the levy,” Edge said. “It’d be a total rehabilitation of it.”
The total for the project is $788,000, he said, with $539,000 being just the pumps.

In the grant, FEMA would pay for 75 percent of the project, Kentucky Emergency Management would pay for 12 percent, and the city would be required to pay for 13 percent, which Edge said would be $102,000.
Hawesville mayor Charles King said the levy had needed work for years but the city wasn’t able to do much about it.

“This has been looming over Hawesville’s head, most of you know it, for 10 years. And there was no way we could afford it. No possible way,” he said. “Well the Corps of Engineers suggested we just put a tax on everybody in Hawesville called a levy tax.”

The grant will make it happen, but Edge said the city wouldn’t have been able to even apply without help from the state Division of Water.
“The Division of Water really helped us out on this because to get this grant it has to pass a benefit cost analysis,” he said. “So we have to show that for $788,000 there’s $788,000 worth of benefit.”

With a railroad, a water plant and many houses around that value was easy to ascertain, he said, but they had to show their work.
“We had to show it and we had to model that flood data,” he said. “It’s never been flooded so we had to produce it, so the Division of Water produced that data for us to show what would happen if those pumps went out and were not working and the water was up.”

Edge warned that the grant process will be a slow one.
“We’re applying now and it could be a year,” he said. “We applied for projects in this same program in May of ’19 and we’re just now being awarded some of those projects.”