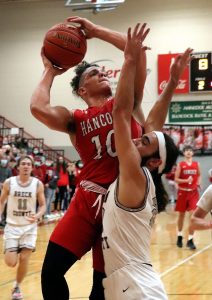 “Kaleb got us going and gave us a cushion, and what I really liked was that when they cut the lead to one (point) we closed the game out. We made the plays we had to make to win and we’re advancing,” HCHS coach Mike Orr said.

Hancock County took control early on when Keown buried three first quarter 3’s and Darian Clay and Ryan Ogle scored two baskets each. The Hornets led 20-15 and it got better from there.

Keown splashed three more from downtown in the second period and Even Ferry was running the show. The point guard dished and scored twice and Devyn Powers knocked down a “3” to help the Hornets build a 38-27 halftime lead.

The Tigers didn’t make it easy as they began to battle back in the second half. Kolton Miller and Kason Morris led a charge for Breck County while Clay carried the Hornets’ offense in the third. Clay tallied nine points in the frame, but the Tigers won the quarter 15-11 and trailed by seven (49-42) heading to the fourth.

Breck continued to inch their way closer with timely 3’s and a full court pressure that, while not forcing turnovers, gradually wore down the Hornets starting five.

Eamon O’Donoghue connected from “3” during a Breck County run that pulled the Tigers to within one point (53-52) with under four minutes to play. But the Hornets answered back when Ferry made a great pass to Ogle who scored in the paint.

Morris hit two foul shots to bring Breck back to within two, but Keown countered when he followed a missed shot with a rebound and a basket to make the score 57-54 with 2:45 remaining on the clock.

Morris pulled Breck back to within one point with a jump shot, but the Hornets showed poise on the following possession. Ferry and Powers worked the ball until they found Keown open on the perimeter. The sophomore teed up his 3-point attempted and buried it to give Hancock County some much needed breathing room at 60-56.

Ferry later hit 2 of 2 from the line that gave the Hornets a six point lead with a minute to go, but moments later Cole Critchelow knocked down a huge “3” from the baseline that kept hope alive for Breck.
Morris had two good looks at baskets during the final seconds, but the senior’s shot would not fall. Ferry and Keown scored from the stripe to seal the victory for the Hornets.

Morris and O’Donoghue scored 16 points each for Breck County.
The Hornets advanced to play Meade County in the district title game at HCHS on Friday at 6:00 pm.