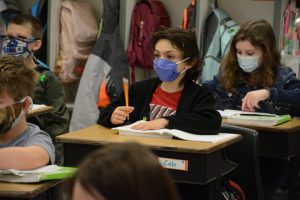 Students have been back in school for more than a week, a time that’s been celebrated by staff and students and that’s bringing talk of the return of prom, graduations, and even field days.

Students returned to in-person classes four days a week, at full capacity, on March 8, nearly a year after schools closed temporarily last March due to worries over the COVID-19 pandemic. They had returned last September on a split A/B schedule where students were divided in two groups and attended on alternating days, which continued through February.

“Even though kids had been here either A days or B days, you heard several students that first day that said, ‘Wow, I didn’t know what you really looked like. I’d only seen you on the screen,’” she said. “There was more of that than we ever imagined.”

The return after so long was reason to celebrate. 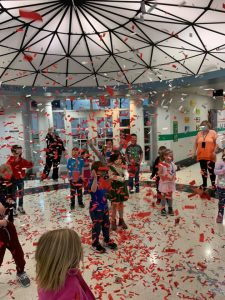 “On that first day… we had a big sign out on the lawn welcoming kids back, we had balloons at all of our entrances, just letting everyone know how excited we were to have all of our students back in the building,” she said.
They also brought individual classes to the front lobby one at a time for a short celebration that involved music, balloons and confetti.

After the celebrations were over classes settled in, but students were a little slow to return to their old ways.
“The first couple of days they were quiet, just because it’s been a year,” she said. “They’ve very quickly picked back up on friendships and they’ve all missed their social time. They’ve missed being able to play with friends and talk with friends and see their friends.”

Students returned to Hancock County Middle School too, and principal Traci Sanders said it’s a big change from what they’ve experienced over the past year, but a welcome one.
“The teachers are excited, I’m excited, we’re all excited to have the students back in school, and they’re excited to be here,” she said. “I guess it’s one of those things, you don’t realize how much you miss it until you don’t have it.”

Things are necessarily different, with masks and sanitizing, like at all schools, but Sanders said students are eating in their classrooms to stay six feet apart, and dismissing classes one at a time to keep hallways clear. They’re also not using lockers, which she said has saved time in the day.

“Normally when we would change classes the students go to their lockers and they’re students, they’re going to hang out at their lockers and talk…” she said. “Now they’re just carrying their materials around, which isn’t that many because we don’t have books like we did back in the day.”

Having the full student body back in buildings is steering talk and minds toward other more normal things, like field days, prom and graduations.
“We are having prom,” said Carrie Kimbrell, the district’s student success coordinator.
That’s scheduled for Saturday, May 15 from 9-11 p.m. at the Owensboro Convention Center, although it’ll be faced with changes and challenges due to COVID-19 too.

Only Hancock County High School students will be allowed to attend, meaning no students from other schools or who have graduated, and only 240 tickets will be sold.
Graduations, mostly canceled or changed to be unrecognizable last school year, should return this school year too.
“We will be having graduations at all levels,” Kimbrell said. “They’ll just look a little bit different. As far as what they’ll look like we’re kind of still in the works with that.”

Sanders said her eighth graders will be having some sort of graduation ceremony, although where and how are still undecided.
“I don’t have the details worked out yet but we’re definitely planning on having eighth grade graduation this year,” she said.
It won’t be like other years, although she pointed out that the ceremony had changed some in recent years anyway, having moved from the middle school gym to the high school, for space.
“I’ll have to look at the weather. I could even go to the football field,” she said.

At North, they’re talking not only about fifth grade graduation, but even lesser events that are meaningful to kids.
“We have begun talking about, what are some of those things that we do at the end of the year, like field day and run for the roses and obviously fifth grade graduation is a big deal,” Moore said.
“Right now we’re just brainstorming. We want all of those things to happen. They’re important to kids and they’re milestones,” she said.
Jennifer Howe at South Hancock Elementary and Ashley Gorman at Hancock County High School didn’t return calls for this story.