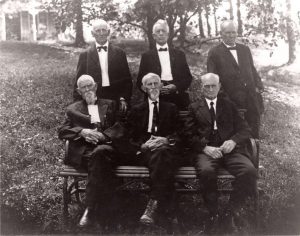 A person can experience a lot in 97 years, and Marjorie Baker Richardson is not only not an exception, but she’s been considered dead twice and comes from a family that helped build the courthouse, ran a hotel downtown, and even took in a mysterious girl who later disappeared without a trace.
Born in Philpot on September 14, 1923 to Albert and Jennetta Baker, her life started with a near ending.
“When I was born, mother couldn’t have me… she almost died,” Richardson said. “Finally I was born and they asked Daddy, which one do you want me to try to save? Well Daddy said June, you know, so he just laid me at the foot of the bed because he thought I was dead.”
“And Mrs. Martin, a neighbor, came in (after) just a few minutes I guess, and she grabbed me up and wrapped me up in a blanket and took me over by the fireplace and worked with me,” she said. Little Marjorie finally made a sound and showed signs of life.
“So anyway, they thought I died, but I didn’t,” she said.

It was an inauspicious start to a girl whose family descended from prominence.
“As far as I know William Penn is my fifth or sixth grandpa,” she said.
William Penn founded the colony of Pennsylvania and oversaw the planning and development of Philadelphia.

Overseeing important historical locations runs in her family, as it was her uncle, Billy Baker, who got the courthouse built in downtown Hawesville, which still stands today.
He was the county judge at the time and he saw to it that the courthouse was built, bringing in bricks and lumber from Pennsylvania by boat.

Not everyone was happy with the courthouse.
“The people of Hancock County was so mad at him,” she said. “They said they would never ever get it paid for and besides they would probably have to have high taxes.
“And as far as I know he didn’t get elected the next time,” she said.
Her grandfather, George Clifton Penn Baker, was the sheriff and ran a hotel on Main Street called the Baker Hotel, which was located just north of where the Clarion office is today. She has furniture in her house today from that hotel.

After living in Hawesville as a child, Richardson’s family moved to Floral after her dad lost his job working for the city during the Depression.
It was there that she faced death again at around 6 years old.
“When I lived out to Floral I got diphtheria, and the doctor came and he worked with me and everything, and he said he thought I was dying when he came,” she said.
“He started working with me, working with me, and he thought, oh, so he gave up and he started to put the cover over me,” she said. “And he thought, oh she’s the only child, so he started working with me again, and I made a little noise in my throat, and he saved my life.”

After graduating from Beechmont she began working at General Electric in Owensboro and soon she met her future husband, R.L. Richardson.
“We went together quite a bit. I don’t know, a couple of years I guess,” she said.
One day they were heading toward Lewisport on a date and they passed a house that was still being built, where the wife had died of cancer before the family had even gotten moved all the way in. She heard the husband was in the process of finishing the house and getting it ready to sell.
“I said ‘R.L. if you buy that new house I’ll marry you,’ you know, just kidding,” she said. 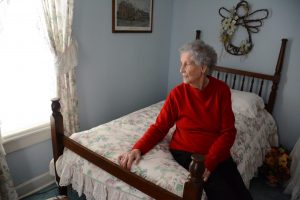 R.L. went to the house the next day at 7 a.m. and asked the man if it was for sale and was told it was.
“He said, ‘Well here’s $50, you hold it for me,’” she said.
He went to the bank and got a loan using his farmland as collateral.
“So when I came home from work he was down to mama and daddy’s and I thought, what’s he doing down here this time of day?” she said. “He said, ‘Come out to the car, I’ve got something to show you.’”
She thought maybe he’d gotten her a puppy because her dog had died, but she realized it wouldn’t be in a car but out running around.
“I had no idea what he was going to show me,” she said. “So I went out there and he said, ‘Here’s the deed to that new house up there. You said you’d marry me if I buy it. All you have to do is sign it.’”
The couple got married that December. He was 28 and she was 24. They had four boys, each four years apart.

She faced death again after she was married, this time behind the wheel of a car. She was driving to Tell City to get ingredients to make R.L. a jam cake when she wrecked before she got to the bridge.
“It was black ice,” she said. “It about killed me.”
She broke her leg and injured her face and she still bears the scars today.
“I hit the windshield, or hit something,” she said. “My eye never did go back. I was just a mess.”

Her family has been involved in other famous stories in Hancock County’s history, including the infamous murder in 1916 of Henry Schafer by a local doctor, R.W. Frymire, who had also planned to kill Marjorie’s relative.
“He came to kill uncle James,” she said. “And aunt Nancy met him out there and she told him that he had gone to Hawesville. So that’s when he called one of the grandchildren that was there and he told them to go get Mr. Schafer and tell him to come to the schoolhouse, he wanted to talk to him.”
At the schoolhouse Frymire shot and stabbed Schafer to death.

Richardson’s family also includes the story of a mysterious young girl who showed up out of nowhere, stayed with the family for years, and then was gone forever.
While her grandfather was sheriff someone came and told him that there was a young black girl wandering around Hawesville who wouldn’t tell anyone who she was.
“Grandpa went and tried to talk to her and she wouldn’t tell him nothing,” she said. “So he said well you can’t just live out here on the street, and so he took her home with him.”
Marjorie believes the girl was somewhere around 12 years old, and she continued to refuse to say where she was from or who she was.
“So he said well you can stay here but you’ll have to help my wife because she needs somebody to help her,” she said. “They just fell in love with her, and she helped in the hotel there.”

After about a year Marjorie’s grandmother became pregnant. So did the girl, but she wouldn’t say who the father was.  The two babies played in the same pen and the girl continued living with the family. One day when her son was about 5 years old she took him to town and returned without him.