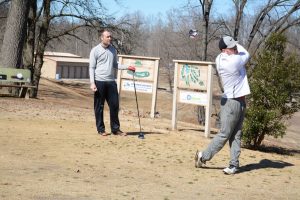 In preparation for the upcoming season, Windward Heights Country Club approved a new membership drive at its board meeting Tuesday evening. Current members that bring in new members receive $100 off of their annual dues.

If the member already paid their dues for the year, they get a $100 check from the club. This new drive is one of the steps the club made to make improvements to the country club.

In addition to cutting down trees, the put down new sod on number four green. Lindsey said this work made the green easier to play because it eliminated the slope on it.
“They have been up there working a lot,” Lindsey said.

The crew also cleaned up much of the small brush around the swimming pool to help keep it from getting cluttered with leaves. Lindsey said it remains shaded, which helps keep it cool.

Though it is still winter, the course is open for people wanting to play a round of golf. All of the snow and ice left the course muddy, which limits the traffic on the course.
“It is cart path only,” Lindsey said. “It will be that way for a long time probably.”

Speaking of the cart path, Lindsey said the crew also made repairs to the cart path to make it smoother. They used concrete to patch rough spots on the path.

With COVID-19 still around, the lounge remains closed. Lindsey said the lounge might open for Fridays and Saturdays in April, if the pandemic is waning locally. Also, Lindsey said in April the club plans to restart the men’s and couple’s leagues.

Currently the club is running a promotion for families taking out a three-year membership. If a family joins for three years, it costs $954 per year instead of the normal $1,200. This promotion is helping to attract more families.
“The good thing is we are getting younger members,” Lindsey said.