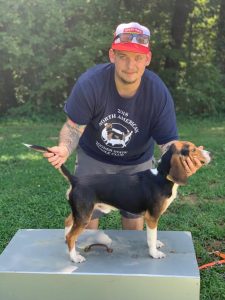 A Centertown, KY man died Monday morning in an accident west of Lewisport on U.S. 60, immediately east of the intersection of Morton Lane/McGill Lane.

According to the accident report filed by Hancock County Sheriff Dale Bozarth, Chaylin R. Cowles, age 24, died when his 2000 Chevrolet S-10 pickup crossed the centerline and struck an oncoming semi in the westbound lane of U.S. 60. The accident happened at roughly 6:45 a.m. Cowles worked at Century Aluminum in Hawesville.

According to Bozarth’s report, Steven R. Leslie, of Garfield, KY, noticed a vehicle coming at him in his lane of travel, and “he started slowing down and pulled right onto the shoulder.” Bozarth wrote that Leslie thought Cowles was attempting to pass another vehicle, but quickly noticed there was not a vehicle for him to pass. Bozarth wrote that Leslie pulled his 2001 Peterbilt semi as far to the right as possible.
“Unit one (Cowles) struck him at the westbound fog line, cutting down his steer tire on the driver’s side,” Bozarth wrote. “Unable to steer, he traveled another 153 feet up the road and crossed lanes to Bittel Road and ditch.”

Several different witnesses told Bozarth they witnessed Cowles’ S-10 pickup weaving in and out of the eastbound lane immediately prior to the accident. Speed did not play a factor in the accident as the witnesses said Cowles drove at a speed of 55 MPH just prior to the collision. Bozarth estimated the westbound semi’s speed at between 35 to 40 MPH at the time of impact.

Cowles leaves behind a wife and two daughters, with a baby on the way. His wife’s name is Chelsie, and his two daughters are Addison and Marley.

With Cowles’ passing, The Cowles Children fund was, anyone wanting to contribute to the fund can contact Stacy Embry, 79 Ceralvo Lane, Rockport, KY, 42369.

The family plans a celebration of life this Saturday at Horse Branch General Baptist Church from 1 to 4 p.m. The church is located at 121 Olaton Road, Horse Branch, KY.