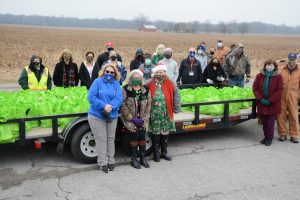 Despite COVID-19 changing nearly everything, the annual Christmas giveaway went off without a hitch, and in fact the organizers say they might incorporate some of the changes into future years.
“We had 305 kids,” said Beth Payne, the store manager for St. Vincent de Paul and the county coordinator for Toys for Tots. “And every one of them got toys.”

The toys came from Toys for Tots, and each of those kids also got socks, shoes and underwear from St. Vincent de Paul.
There were also around 300 families that got meals from Santa Sacks, which included a turkey, dressing, a pie, fruits, vegetables, toilet paper, a Bible, candy and lots more.
All of this was handed out at the Lewisport Community Center, which was the new location after COVID-19 restrictions meant families couldn’t come in and shop through the toys like previous years, or pick up their meals inside.

This year parents had to sign up beforehand like other years, but they had to list their kids and what kinds of presents they’d want, and volunteers picked out what toys they had that most closely matched, and they’d gather it all up into one spot and deliver the toys, clothes and food to the car as parents drove up.
“I think everything went really good,” said Noel Quinn, who along with her husband Monty started Santa Sacks many years ago.
“The only thing we figured out is that walkie talkies don’t work in the community center,” she said.

The giveaway normally has more than 100 volunteers working, but virus restrictions meant that number was down in the low 30s this year in order to maintain social distancing, but also due to some of the volunteers’ ages.
“I know I have some older people that usually help us and really enjoy it and they were in tears when I told them I didn’t want to be responsible for them, because I didn’t want them getting COVID,” said Quinn.

Each of the children whose parents signed up beforehand was able to get at least 10 toys each, Payne said, because of the number of donations that came in this year.
“(It’s) according to how many toys we get that year, we divide them between all the children,” she said. “Once word was put out there the whole community came together, and then Toys for Tots pretty much matched the toys. Whatever we got, they gave us more. Then we had plenty of toys to give every child.”

This year was a good time to be able to give children lots of toys, she said, because of how many of them have been stuck at home due to the virus.
“My opinion is they’re having to deal with a whole lot this year, they should have a good Christmas,” she said. “Because half of childhood is socializing and they’re not getting to do that at all.”
Toys are from Toys for Tots donations, and the money for the food comes from donations to Santa Sacks from the community, and revenue from sales of donated items sold at St. Vincent de Paul’s thrift stores pays for the shoes, socks and underwear.
“We have individuals in this county that have for years, since we’ve been doing it, they’ll send me a check for Santa Sacks,” said Quinn. “We had a couple of very, very generous donors this year. A couple wrote me a check for $5,000.”

Rather than taking the amount of money donated and buying as much food as that will cover, Quinn said she figures out the need first and goes from there.
“We figure out how many people we’ve got in the county that need food and everything,” she said, “and I order the food and go out and get it and then just hope and pray that I have enough money donated that it’ll cover it.”
In all the years of doing Santa Sacks they’ve never not had enough money.
“I have never ever been short,” she said. “But if there is ever a time that it does, that we need more money, I’m sure there’s people we can go to, and if push comes to shove Monty and I will do it. But it’s never come to that.”

“God’s good,” she said. “He takes care of us, you know… When push comes to shove and people need something in this county, they come together. People in this county do come together.”
“You have no idea how blessed we are to live in Hancock County,” said Payne. “Because I go to these meetings and talk to other counties and it’s hard to get that many toys.”

Payne liked how smoothly the giveaway went using the Community Center, and she said the groups might do something similar next year to save time and trouble for the people who are getting the goods.
“We may continue doing it this way where it’s a drive up,” she said. “If it’s raining it’s going to put a lot of hardship on us, but the people that are coming through to get the food and get the toys and stuff it wouldn’t.”
“So we’ll talk about it because there’s always room for improvement,” she said.