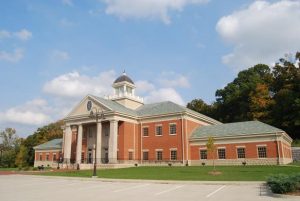 “What they see from Frankfort is a lot of times it is difficult to get money this side of Interstate 65,” Roberts said. “You all have been in conferences where they talk about the Golden Triangle.”

The Golden Triangle is an area of the state where the bulk of the population and prosperity exists. It is bounded by Louisville on the west, Covington to the north, and Lexington to the east. Roberts said other counties in the Green River Area Development District also plan to join the lobbying group. He said the annual dues total $250 for the county.
“I recommend we join it for at least the first year and see what we get from it,” Roberts said. “What do you guys think?”

Magistrate Hodskins said something needed to be done about the situation in regards to the lack of state monies flowing to Western Kentucky. The motion to join the group passed on a 5-0 vote.

Snow bids
Fiscal court also awarded the snow removal bids. The court broke the bids down into snow removal on individual parking lots, and emergency snow removal on the roads. In regards to the parking lots, fiscal court awarded John White the bid to clear the Career Center parking lot, the administration building and the Health Department. He bid $215, $250 and $175 respectively.
GN Excavating received the bids to clean parking lots at the Senior Center, Food Pantry, Judicial Center and the old Courthouse. He bid $250, $165, $185 and $175 respectively.  “Will they accept them split like that?” magistrate LT Newton asked.  Roberts said the court usually split the bids each year.
“Some bidders have had a problem that if they did not get the whole thing, they did not want anything,” Newton said.

Roberts said several contractors that did not bid said they preferred not to receive all of the areas to clean simply because if a large snow hit they could not clean all the areas in one day. Splitting the bid allows more areas to be cleaned at the same time.
“I am sure Gary (GN Excavating) does not want everything,” magistrate John Mark Gray said.
The magistrates approved the bids on a 5-0 vote.

In other business
• On a 5-0 vote fiscal court approved ordinance 2020-03 that creates a new building inspector for the county. The ordinance grants the inspector the authority to inspect commercial and industrial buildings in the county.
• Fiscal court merged Industrial Park Road east with Bittel Road to create one road for 911 purposes. Industrial Park Road East and Bittel Road are the gravel roads that run in front of and to the east of Precision Roll Grinders in Lewisport.
• Fiscal court approved a new sign for the Senior Center in Hawesville. The award went to Logos in Tell City, Ind. at a cost of $365.
• Fiscal court tabled the awarding of a new track loader due to incomplete information on one submitted bid. The court plans to discuss the issue at the December meeting.