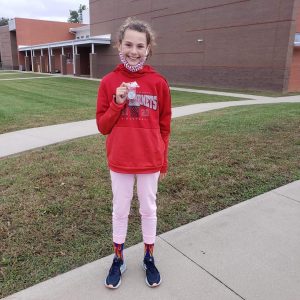 “I was really excited that Izzy had her breakout race,” HCHS coach Wes Meserve said. “I can’t say I was entirely surprised, but she was definitely an unknown going into the meet.

“I’ve seen improvements in critical races, but I’m not sure I’ve ever had a girl go from being ranked so far back (17th) to finishing so high. She dropped 1:50 from her previous best 5K time. I’ve been telling Izzy since the first race this season that she’s faster than she thinks she is. Something just clicked for her this weekend and she didn’t hold back.”

“I really thought Aly or Della was going to win on Saturday because they’ve both been running great races and looking even better during workouts. They’ve both been very focused lately,” Meserve said. “As a team, we ran well. Most of the girls either ran a season best or were within a few seconds of their best time. The girls were excited to qualify for state meet for the team’s 24th consecutive year.”

Bethlehem won the regional team title with 58 points. Metcalfe was second with 69, followed by HCHS with 73, Edmonson and Green counties and finally Fort Knox.

Logan Ballard of Bethlehem won the race with a time of 17:19. Bethlehem won the team title with 32 points. “I’ve been really proud of what the guys have done. We had five boys from last year’s team that didn’t come out for various reasons,” the coach said.  “I’ve never coached less than eight varsity boys that I can remember. With just three, and them being grades 7-9, this has been a different kind of season.  Our boys persevered and ended on a good note. Jackson qualified for state and both Hunter and Hayden ran season best times. This will be a fun group to build a team around as soon as we can get back to something that resembles normal.”