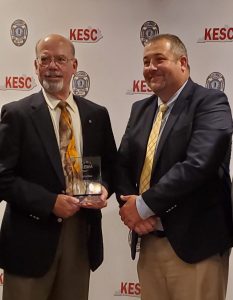 At the Kentucky Emergency Management Association awards ceremony held in Lexington, Ky on September 25, the association named Hancock County’s Rick Cox to its hall of fame. Eleven other individuals received various honors at the ceremony.

“Recipients this year were selected from peer nominations from across the state,” KEMA President Drew Chandler said in a press release. “These individuals stood out for their continuous contributions to make Kentucky a safer place.”

The bio said in 1980 he added another title to his name when he became the Hancock County Treasurer, a position he held for seven years. He continued to serve as the director of county communications while the treasurer. After a seven-year run as the treasurer, Cox moved on to other ventures.

In November of 1987 he accepted a position as the Area Manager for the Kentucky Disaster and Emergency Service, the bio said. He also served on various committees, boards, commissions and task forces for Area three and the Kentucky Division of Emergency Management in Northwest Kentucky, which included Hancock, Daviess, Henderson, McLean, Ohio, Union and Webster counties.

Throughout his career, Cox held various positions, and served on various teams responding to natural disasters throughout the nation, the bio said. In 1998 he served as an A-Team member and leader for Hurricane George, the 2001 World Trade Center attack, Hurricane Isabel in 2003, Hurricane Charlie, Ivan and Jeanne in 2004 and Hurricane Katrina and Hurricane Wilma in 2005.

Cox also held various teaching roles associated with emergency management, both in state and throughout the nation. The bio said Cox “served as an Adjunct Instructor at the Emergency Management Institute,” in Emmitsburg, Maryland. There he taught a FEMA conducted course. He taught the Department of Occupational Safety and Health at Murray State University in Kentucky, as well as the State Fire Rescue Training for the Kentucky Community and Technical College System in Calhoun, KY. He continues to teach Fire and Rescue training for the KCTCS.

Cox received his Certified Emergency Manager credentials in 1995 from the International Association of Emergency managers, the bio said. Cox continues to keep his credentials up-to-date as he received recertification in 2016.

Cox continues to stay active in the Hancock County community, as he remains a member of the Hawesville Volunteer Fire department, where he held various offices including Fire Chief. The bio said he joined the department in 1980. He joined the Green River Firefighters’ Association in 1984, and continues to serve. He held various offices such as the President and 1st vice-president over the years. He continues to remain active in the association, the bio said.