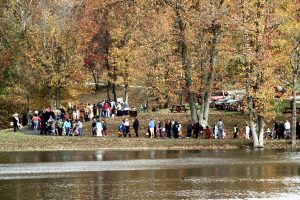 Halloween won’t be canceled in the county or the city of Lewisport, after both governments decided to hold Halloween activities on October 31 with the assumption that those who don’t feel safe can simply avoid it.

The Hancock County Fiscal Court decided Monday to continue with its annual Trail of Treats, the event at Vastwood Park where businesses and groups hand out candy along a walking trail as kids file past.

Judge-executive Johnny “Chic” Roberts told the court that he believed the county could hold the event safely.

“One, it’s outside, and two it’s completely voluntary,” he said. “With school back in and they’re having some football games now, it would be my recommendation that we have Trail of Treats with restrictions.”

Those restrictions include something normally common at Halloween: masks.

“We talked about masks and gloves,” he said.

Those masks and gloves would be for the people handing out candy, in order to protect those families who come through the line to get candy.

But senior services director Lona Morton, who was at the meeting, asked about requiring masks for kids and parents too.

“Will the adults be required to wear a mask while they’re out there with the children?” she said.

“I’d say that’s up to them outside like that,” said magistrate John Mark Gray.

“Have you ever seen how some of them clump up and come through there?” she said.

“If they go to the park they do that, so what are you going to do?” Gray answered.

After discussing other possible options, like putting candy in bags for kids to get on their own, magistrate Kasey Emmick said he agrees that everyone there should wear masks, and magistrate Wayne Hodskins said he will be skipping the event all together due to medical problems that might make him more susceptible to the virus.

“There’s no perfect scenario,” said Roberts. “We’re walking at Vastwood on the trail now without masks. An hour before this starts you can walk with as many people, sometimes they’re passing each other.”

The final decision was to require those handing out candy to wear a mask and gloves, and to recommend those trick or treating to wear masks if at all possible.

Lewisport also decided to move forward with Halloween, although the city said it’s not organizing the day, just not preventing it from happening.

“The city of Lewisport does not recognize Halloween as a city sponsored event,” Mayor Chad Gregory said. Other events like parades have been canceled.

“We are setting the hours for you to observe it in Lewisport at a safe time,” he said. “This is a matter of choice. If you do not want to do this, do not participate. Turn your porch light off, don’t take the kids trick or treating.”

Hawesville said it will make a decision on its Halloween plans at its October council meeting.