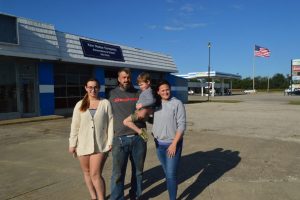 In July of this year David Kerr, former shop foreman at First Class Services in Lewisport, opened a mobile mechanic shop, and operated it out of his garage. Wanting more traffic to his business, he and wife Karie started to look around for some place to open a permanent shop. They found the former Chappell Shell station in Lewisport.

He and wife Karie named the business Kerr Motor Company, and the shop performs a variety of automotive work ranging from golf carts to semis to anything in-between, foreign or domestic. The shop does all forms of mechanic work except alignments, rebuilding transmissions or selling tires.

“Basically, anything you want that has a motor you want fixed, bring it to me and I will do everything I can to get it fixed for you,” Dave said. “We work on big trucks. I can analyze and diagnose Caterpillar engines, Detroits, Volvo, anything that is out there.”

Born and raised in Knoxville, Tennessee, Dave joined the Marine Corps and worked as a mechanic for 20 years. He oversaw mechanic shops while in the Marines, gaining extensive experience working on a variety of engines.

“I got out and worked for different civilian shops for a while,” Dave said. “I was the shop foreman at First Class for about a year.”

Dave said he believes in treating people fairly, and performing high quality work at an affordable price. He does not believe in price gouging his customers.

“I stand by everything I do,” Dave said. “If I do not fix it right the first time, I fix it for free the next time.”

Not only does Dave stand behind the work he does on vehicles, he also backs the part warranty on the items he orders when performing repairs, often for a year or more.

“I do not believe you should have to replace the same part after a year,” he said.

So, how did someone born and raised in Knoxville, Tennessee end up in Hancock County? He just happened to meet a young lady born and raised here, but who later moved away from the county. His wife Karie is the former Karie parker, daughter of Cynthia and Jerry parker, and granddaughter of Bill and Helen Lyles of Lewisport. They moved to Hancock County in 2019 after Karie’s father Jerry was diagnosed with cancer. They moved here to help care for her parents, and also her grandparents.

Kerr Automotive is located at 8160 Hwy. 60, next to Crossroads IGA in Lewisport. For more information on the types of automotive work performed, or for free estimates, call 270.702.6909.