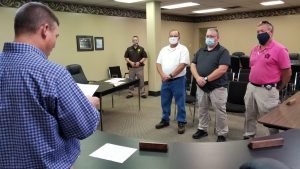 Two new deputies were sworn in last week to fill two openings in the Hancock County Sheriff’s Office, the first time in more than a year that the department has had a full staff.
Frank Howard and Butch Garst were sworn in Friday, with Howard filling a spot that’s been vacant for more than a year, and Garst taking over as the new school resource officer, or SRO.

Both men are retired officers, Howard from Daviess County Sheriff’s Office and Garst from Kentucky State Police.  “They’ve got 20 years of service. You just don’t get any more mature than that,” said sheriff Dale Bozarth. And with COVID-19 halting police training, it’s a benefit to hire deputies who have already been working officers.“You don’t have to wait to put the officer to work and that’s kind of critical right now,” he said.

One of the openings in the department came open after a new hire faced the reality of more than 20 weeks of training three hours away, which kept him away from his young family.
The other opening was recent, when the former SRO Gary Mattingly took a similar job in Daviess County, which was exactly what Garst had been waiting for.
He’d worked in Hancock County sporadically with KSP, but never as his full-time assignment. After retiring in 2013, he worked for a while in McLean County and eventually was working in Evansville selling uniforms and accessories to law enforcement, but soon he missed being an active officer and he decided to come back. He’d investigated child abuse cases with KSP and had worked alongside many SROs, so he looked for an opening.

“Not long after I’d made that decision, that’s when I heard about possibility of Daviess County starting a school police,” he said. “I wasn’t really interested in that even though that’s my home, but I was going to see who was going to be going.”
He figured they’d pull officers from surrounding counties. “And I got lucky, Hancock County’s one of them,” he said. “That’s when I had a perfect opportunity to run over here and apply for it.”

Despite living in Owensboro his entire career and working mostly in Ohio County and other areas, Garst always wanted to be in Hancock County.
“I always loved this county,” he said. “I tried to transfer here but at that time the call volume wasn’t high enough to add another trooper, according to the captain… I’d known Dale and Chris for years and years and always thought it’d be great to work up here with them.”

The county had less major crime and he just liked the people.
“The people were just always more friendly I felt here compared to the other counties I worked in,” he said. “So I’ve loved it for a long time, my heart’s been here a long time.”

Garst first day was Monday and he will be working for the schools except for the possibility of a few weeks in the summer to help at the fair and to get in some training. Howard started last Thursday, September 10, and after a week or two of getting acquainted with the county and its roads, will be out patrolling full-time.
dave.hancockclarion
@gmail.com 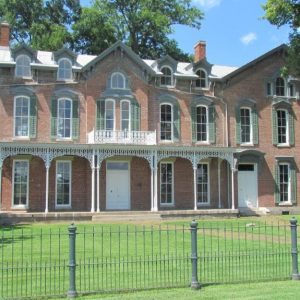