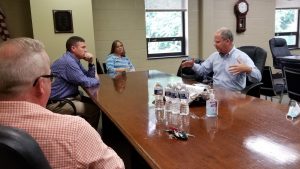 Guthrie talks virus, internet and the election in Hancock County
By Dave Taylor

U.S. Representative Brett Guthrie stopped by Hancock County Friday to visit with local government officials and discussed a wide range of topics including the COVID-19 response, the November election and forcing internet providers to say how much coverage they actually provide.
Guthrie, a Republican, spoke to Hancock County Judge-Executive Johnny “Chic” Roberts and Lewisport mayor Chad Gregory, where the men could ask questions or voice concerns and Guthrie could get feedback from the community.

“If you look at COVID, you know the president gets busted every day for saying this, but a lot of people really believed it would go away when it got warm,” Guthrie said.
It didn’t go away, however, and the use of personal protective equipment (PPE) spiked because hospitals everywhere were treating everyone with a fever as if they had the virus. He gave an example of one doctor he knows who normally uses two sets of PPE per month, but after the virus hit he used 12 in a day.

While PPE production ramped up to meet demand, the government decided to give a $1,200 stimulus check to all adults and add $600 to unemployment payments, plus implementing the PPP in order to keep the economy afloat and to preserve jobs in what was thought to be a short-term crisis.
“I think Wal-Mart sold more big screen TVs than they’ve ever sold,” he said.

Now several months in, people are asking him about a second round of stimulus checks, but Guthrie explained that the money has to be paid back eventually and the government has to be more careful with its use. “That’s borrowed money,” he said. “I understand it’s beneficial to people. Sometimes we need to say well, we don’t need to have immediate money at the expense of our children and grandchildren, and we have to look at it that way.”

If the federal government is going to spend money to stimulate the economy while it’s shut down due to the virus, Guthrie said it might be better to use the money on things that will have a long-lasting effect, like on broadband or other infrastructure.

“What you gave everybody $1,200 for you probably could’ve done broadband through a substantial part of the country, which I know is very important to what you guys do here,” he said.
“If you built a bridge over the Ohio River out here with stimulus money, the people paying for it 30 years from now would be driving across it,” he said. “I think we need to spend it on tangible things, things you can touch.”

An end for the virus might be in sight, he said, through the development of vaccines, some of which could be ready soon, but any vaccine approved will be safe despite worries by some.
“There will not be a vaccine on the marketplace until the FDA rules it safe and effective by all their standards. As a matter of fact they’re using higher standards than they do normally on a phase three test,” he said. “They’re testing 30,000 people per vaccine versus 5,000 or 6,000 because they know they’re doing it quickly, they’re doing it rapidly and they want to make sure it’s done right.”

“Most scientists who do this without bias…. say by December we’ll have a vaccine,” he said.
President Donald Trump’s administration relaxed rules about vaccine production, which normally requires approval before any can be made, but in this instance, companies are being allowed to produce large quantities of the vaccines as they’re waiting for approval in order to have them ready quickly if that approval comes.

“What we’re going to be able to say is we have a safe and effective vaccine and it’s ready to be distributed,” he said.  If it’s not approved it’ll be destroyed.  That vaccine will be the key to reopening the economy fully, he said, because it can protect the most vulnerable.

“This is not as bad as the flu on young people. It’s worse than the flu on old people,” he said. “So if you could inoculate grandma and grandpa, people in nursing homes, first line workers, healthcare workers, then everybody else can kind of go about their business, because the risk, if you don’t have a comorbidity is close to zero for people that are young and healthy.”

One problem is that internet and cell phone companies can claim that an area is covered even when just a tiny portion of it is, because of the way laws are currently written.
“They can by law say it’s covered when it’s really most people on the ground say it’s not,” he said.
“We’re trying to change the commerce department’s view that if you’re going to claim coverage then you’ve got to really cover it,” he said. “The information (internet companies) have is accurate according to the level they’re required to report it, and that’s where we have to make sure the level they’re required to report it reflects reality.”

Election
November’s election, which is the subject of controversy over mail-in ballots and concern over voter fraud, will be safe, Guthrie said, and he himself has already requested his ballot by mail.
The short but dramatic public debate over the U.S. Postal Service and whether Trump was shutting it down to affect the election was just a hoax, he said.

“The president hired a guy who’s a logistics person to be postmaster general,” Guthrie said. “He made an assessment. He says envelope mail is going down, package mail is going up, particularly during the pandemic, and he came in June.” So the postmaster general decided that lines sorting envelopes could be replaced by ones sorting packages.
“So that’s what happened in June, and people start texting out ‘the president is dismantling the post office,’” he said.

“Speaker Pelosi, given all this stuff going on with coronavirus, flew everybody back on a Saturday between the Democrat and Republican convention to vote on a bailout of the post office,” he said, “when the post office has money in the bank they haven’t spent, because the president’s dismantling the post office was a pure internet hoax.”

“And almost every Democrat who spoke on the floor would get up and say “we want to make sure our ballot is mailed in, but what’s more important, I have veterans that aren’t getting their medicines and we need to get them on time,” he said. “That was accurate, but the veterans’ medicine doesn’t go through the envelope sorter.  They go through the package line.”
“So the fix the postmaster general was putting in, was going to fix the delay in packages,” he said.
dave.hancockclarion
@gmail.com