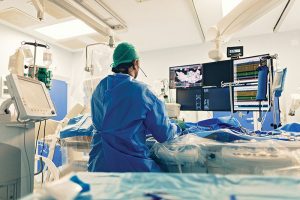 Kentucky hospital investments in new medical and procedural interventions–along with a range of public education efforts–are cause for hope in the battle against heart disease, which remains the No. 1 killer of Kentuckians. The commonwealth has the disheartening distinction of steadily ranking in the top 10 for numbers of cases nationwide.

Dr. Abdelkader Almanfi is an interventional cardiologist and medical director for a new Structural Heart Program at Mercy Health-Lourdes Hospital in Paducah. He has a subspecialty in structural heart issues such as heart valve problems and holes in the heart, seeing patients 18 and up with coronary artery disease or vascular problems.
“My specialty was virtually nonexistent 10 years ago,” he said.
Mercy’s cardiology program has benefited from recruiting physicians like Almanfi and investing $14 million in upgrades, spokesman Kevin Compton said.

In the past decade, Almanfi said, new treatments have become available to treat valvular heart disease—disease or defects in one of the heart’s four valves.
Minimally invasive heart procedures can be performed with only small incisions in the groin or arm, and the field has evolved quickly due to successful medical research and clinical trials, he said.
“We have tools now more than ever, and they will continue developing more than ever to continue to combat heart disease,” he said.
The hospital now has two hybrid operating rooms, one cardiac and one vascular hybrid OR, with new equipment and technology at the ready for structural heart procedures and endovascular work, Compton said.
New facilities for better treatments
Dr. Shawn Flynn is a cardiologist with Ephraim McDowell Health in Danville, focusing his practice on coronary artery disease and structural heart disease with repair and replacement of valves.
Like Almanfi, Flynn also touted the merits of new procedures like transcatheter aortic valve replacements—or TAVR—in use for the past eight years when the aortic valve won’t fully open.
“This procedure has been used more and more,” he said, “and currently there are more TAVRs performed” than open-heart surgeries.
An Ephraim McDowell Health spokesman said investments in equipment and training are key to the success of its Heart and Vascular Institute in Danville. And following routine upgrades to EKG and echo-carts for cardiovascular procedures, plans are in the works to implement the newest imaging systems in its cardiac catheterization labs by the end of this year.

At Pikeville Medical Center, which is in the midst of a phased $32 million expansion to its Heart and Vascular Institute, new procedures are being unveiled routinely, including the minimally invasive MAZE procedure for atrial fibrillation (AFib), TAVR, leadless pacemakers, mitral clips, valvuloplasty and Kentucky’s first TactiCath Contact Force Ablation Catheter for AFib, hospital publications show. In addition, a new valve clinic has opened onsite at PMC.

Three state-of-the-art interventional cardiac catheterization labs are up and running, and a variety of structural heart defect or abnormality treatment procedures have been added.
Dr. Michael Antimisiaris is a cardiologist at PMC’s Heart and Vascular Institute, where he specializes in electrophysiology, the electrical workings of the heart.
Antimisiaris said medical and treatment innovations in his field are regularly emerging.
“We have a whole lot of new options for interventions, and I think that looks very good and very promising,” he said.

However, Antimisiaris said, if heart disease trends continue and preventative measures like lessening main risk factors aren’t widely successful, demand is expected to exceed the number of practicing cardiologists in the next 15 to 20 years.

Less invasive means more patients
Dr. Steve S. Lin is affiliated with CHI Saint Joseph Medical Group in Lexington and has been practicing interventional cardiology for the past 20 years.
“There are numerous new developments in the cardiovascular field along the lines of interventional treatment, as well as medical interventional treatment,” he said.
New, less-invasive structural heart procedures are also allowing a large segment of previously untreatable patients who couldn’t survive open heart surgery due to advanced age or high-risk conditions, to receive treatment and have better quality of life, Lin said.
Before 2015, diabetes medications had been used to lower blood glucose levels, but imparted no heart disease prevention properties. Now, he said, two medications are available that do both.

Statins are often prescribed to those with high cholesterol, but about 10% of patients can’t tolerate their side effects. A new, injectable medication has become an option in recent years for these patients, Lin said. Anticoagulant medications have improved also, with fewer incidences of fatal bleeding.

Bad habits = bad heart health
Obesity rates remain a challenge, as 70% of Kentuckians are categorized as overweight or obese, with rising youth rates.  Fostering healthier habits for life is a focus of research and education at the University of Kentucky College of Public Health. Dean Donna Arnett said the college is closely aligned with state and local health departments. Ongoing research activities at UK explore food and food insecurity in Kentucky, ways to increase consumption of fruits and vegetables, and strategies for cutting smoking rates, in addition to improving access to health care services, particularly in rural areas.
Poverty rates can also influence the behaviors affecting heart health, she said, and keeping youth from smoking and adopting healthy eating habits are key to breaking generational cycles.
“That early childhood period is so important in setting in motion good behaviors,” Arnett said.

Dr. Thomas Salvucci, a cardiologist with Mercy Health in Paducah advises people to manage heart disease risks by maintaining a healthy weight, getting regular medical checkups and keeping current on cholesterol and blood pressure levels. He said many cardiologists recommend a Mediterranean type of diet, with very few processed foods, an abundance of fruits, vegetables, nuts and beans, and limited meat and low-fat dairy.
“Diet, exercise and dropping bad habits are extremely important,” he said. “Exercise is something I think that as Americans we don’t do enough of.”

Dr. Henry Sadlo specializes in general cardiology as well as a newer area of focus, preventative cardiology, using both education and new innovations to help curb heart disease numbers.
Sadlo, who is affiliated with UofL Physicians and is also an assistant professor of cardiovascular disease at UofL, has been in practice in Louisville for 30 years. After 25 years in private practice performing countless emergency procedures on patients who were already suffering from heart disease, he wanted to do more in terms of helping people avoid heart disease altogether.

Most every patient who walks out of his office has been given a healthy heart pamphlet from the American Heart Association. He welcomes print, radio and TV interviews to spread the word about heart-healthy lifestyles and knowing and managing risk factors like smoking, high blood pressure, diabetes, high LDL cholesterol and obesity. And he strongly recommends American Heart Association exercise guidelines of at least 150 minutes per week of moderate intensity exercise.

Baptist Health Louisville is beginning a multimillion-dollar project in early 2021 to add new cardiac hybrid operating room space and a hybrid OR/cardiac catheterization lab, along with a standard electrophysiology/cath lab. Baptist Health Louisville also has the distinction of having one of the largest practices of female cardiologists in the country.
Baptist Health Paducah, which serves patients in a four-state area, offers state-of-the-art procedures such as transcatheter aortic valve replacement (TAVR) and minimally invasive options for treatment of atrial fibrillation.

Chief Administrative Officer at UofL Health – Jewish Hospital John Walsh said new advancements are en route to that facility as well.
“We are upgrading three cath labs at Jewish Hospital this year to include … a Da Vinci XI robot for cardiothoracic surgery and a Monarch bronchoscope for the lung/thoracic surgeons,” he said.
Dr. Victor van Berkel, a cardiovascular and thoracic surgeon with UofL Physicians, said the new robot benefits both physicians and patients.
“It allows cardiac and thoracic surgeons to perform complex operative procedures in a minimally invasive manner, resulting in less risk of infection, less post-operative pain and quicker patient recovery,” he said.

In late February, it was announced that a $1.5 million gift had been bestowed to the Norton Healthcare Foundation from the Robert W. Rounsavall Jr. Family Foundation Inc. to support Norton Heart & Vascular Institute with the creation of the Rounsavall Family Foundation Endowed Chair.
And Norton Healthcare recently added atrial fibrillation and advanced heart failure and recovery programs to its offerings, while also recruiting new cardiologists and subspecialists to help expand its heart care services.

Future plans at Norton include adding a ventricular assist device program for patients in late-stage heart failure, renovating cardiac intensive-care unit rooms, adding a fourth cardiac catheterization lab and a second electrophysiology suite and upgrading diagnostic imaging capabilities.
Dr. Arpit Agrawal, a cardiologist with Norton, said many changes have been made in cardiology over the past couple decades, with greater buildup of imaging tools like ultrasound (echocardiography), coronary MRIs and CT scans that help assess for coronary artery disease.
“There are a lot of medications out there that can stabilize heart disease” including statins, he said.
And there are more educational resources online and elsewhere for patients to learn more about heart disease and how to prevent it.

Agrawal advises everyone to know their family medical history, avoid smoking, receive regular medical checkups, know their cholesterol numbers and maintain a healthy lifestyle to help avoid heart disease.
“Those are things that can reduce your risk of heart disease in the future,” he said. “It’s never too late and it’s never too early to start improving your overall health. ■

What is heart disease?
There are different types of heart disease, many caused by atherosclerosis, which is plaque buildup in the arteries that restricts blood flow. If a blood clot forms, it could then cause a heart attack or stroke. Other types of heart disease include heart failure, arrhythmia, and heart valve problems.
Source: American Heart Association

At the Heart of It: Heart Disease Facts
• Heart disease is the leading cause of death in America for men and women and most racial and ethnic groups.
• In 2017, the most recent year CDC figures are available, 10,343 Kentuckians died of heart disease, ranking ninth nationwide.
• One person dies every 37 seconds in the U.S. from cardiovascular disease.
• One in four deaths nationwide–about 647,000 Americans total– are attributable to heart disease annually.
• Almost half of all Americans have at least one major heart disease risk factor, including high blood pressure, high LDL cholesterol, and smoking. Other risk factors include diabetes, obesity, poor diet, sedentary lifestyle and excessive alcohol use.
Sources: Kentucky Medical Association, U.S. Centers for Disease Control and Prevention, American Heart Association

When in doubt, get checked out
The Kentucky Heart Disease and Stroke Prevention Program advocates for healthier policies and heightened public awareness of heart disease.
Lindsay M. Lewis is a registered nurse and chair of the program’s Heart Systems of Care, encouraging hospitals to join the initiative in its mission.
She said health practitioners have expressed concern during the COVID-19 pandemic because the number of 911 calls related to suspected strokes or heart attacks has noticeably dropped. The assumption, she said, is that people fear additional risks of exposure to the virus in a hospital.
Others may postpone treatment for worrisome symptoms like chest pain or shortness of breath, Lewis said, fearing that it won’t actually be a heart attack and they’ll be embarrassed to have taken an ambulance or checked in to an emergency room, or will be hit with medical bills for a false alarm.
But that means they’re potentially delaying treatment for serious conditions when minutes matter, and Lewis said she wants to reassure people that hospitals have effective protocols for minimizing exposure to COVID-19, processes geared to keep both patients and health care workers safe.

Shannon Clinton is a correspondent for The Lane Report. She can be reached at