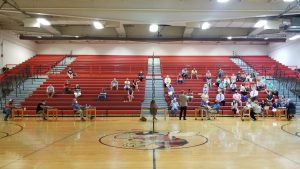 During a lengthy meeting of the Hancock County School Board Thursday, parents voiced their opinion that they wanted their students back in school but the board held to its position that it wouldn’t go against the state recommendation to keep kids out of classrooms until September 28.

Held in the Hancock County High School gym to accommodate a crowd of approximately 60 people, several parents argued that keeping children out of classrooms and limited to virtual learning was an undue hardship to parents, a detriment to students, and was unnecessary given the circumstances.
Early in the meeting staff from all four schools gave presentations on how they’d been finding ways to reach students with virtual classes, new programs, and online communication, but those demonstrations usually included mentions about how they’d rather be teaching in-person, and when it was time for public input the parents followed that theme.

Dan Manrique was the first parent to speak and he said his main question to the board was one that his own child had asked him when they were picking up an iPad and supplies from the school last week.
“You know it’s not safe to come to school for the kids,” he said, “and we wear our masks and we go through the temperature checkpoint and on the other side of the parking lot they had football practice.”
“I love high school and college football. I’m glad they have it. I want them to have it,” he said, “but if we can do that safely, is there not a way to get in-class schooling going safely again and get our kids back out here socializing and being kids and learning in that environment?”

Superintendent Kyle Estes had a fairly simple answer in return.
“My response is I don’t really have a great response to be real honest with you,” he said. “You’ve seen the same guidance that I’ve seen, the same guidance that everybody else has seen, and some of it’s conflicting.”  Sports have been allowed by the KHSAA, he said, and that’s a different governing body than the state department of education that strongly recommended that schools delay in-person classes until at least September 28.  “I’m stuck with some of the things that get passed down just like all of us,” he said.

Board chairman Allen Kennedy added that sports were allowed to continue because Governor Andy Beshear hadn’t stopped them.
“With all due respect, if the governor would’ve stayed out of going back to school like he has had lockjaw since sports started up, then we would be in school by now,” he said.
Brandon House was next to speak, and he said he came representing concerned parents who wanted their children in school, and he came prepared with statistics and questions.
“Since day one of this pandemic we’ve followed the guidelines and recommendations of the CDC,” he said, adding that the CDC has since published information saying kids need in-person learning.
The article said that schools are an important part of the infrastructure of communities and provide employment while providing a safe learning environment for kids and enabling parents to go to work without finding childcare.
But he added that the CDC said schools are critical to some students by watching for signs of child abuse, providing daily meals and physical activity.
“The best available evidence from countries that have opened schools indicates that COVID-19 poses low risk to school age children, at least in areas with low community transmission,” House said, quoting the article. “We have low community transmission.”

He read off stats of the county’s small number of active cases in relation to population and the fact that there have been no deaths, and the 99.9 percent survival rate for those under age 29 in Kentucky.
“These numbers do not warrant our kids not being physically present in our schools,” he said.
“According to the CDC, child abuse cases have fallen dramatically due to kids not being in school. One-fifth of all child abuse cases are reported by teachers. You see the correlation?” he said. “On the other hand, emergency rooms have seen a rise in the severity of abuse cases.”
“We have also been told to limit screen time for our kids. Now we are forced to put them in front of a screen for up to six hours,” he said.
“It was my understanding that our system polled parents before the governor’s recommendation asking if they would be in-person or virtual,” he said.
He asked what the results were and was told that 75 percent of parents had registered to send their children to in-person classes.

“That’s the voice of the people,” he said.
And, he added, “it was not an order by the governor, it was a recommendation.”
B.J. Early followed up on that point by emphasizing that although the state had essentially threatened consequences for not following the recommendation, the district could choose not to follow it, like several others had chosen to do.
“We don’t have to do this,” he said. “Our teachers have told us they don’t want to do this, they don’t like it. They’re doing their best, God bless them. They don’t want to do it. I don’t want to do it as a parent. We don’t have to do it.”  His own high school son is suffering the consequences of learning through assignments and videos on the computer, he said.
“As much work as everyone has put in to something they don’t want to do, to make it as easy as possible, to make it as convenient as possible… for my child it’s not going to work. He’s going to get left behind,” he said.
“The governor issued a recommendation for online learning. Only a recommendation,” he said. “Now, he got a bit of a jerk about it. He said there’d be consequences and he insisted that the schools that would not follow his recommendation would have a meeting.”

He told Estes and the board that they could withstand the intimidation from the state and just do what’s best for local students.  “I don’t care about Team Kentucky, but I do care about Team Hancock,” he said. “And if we all stick together we can go back to where we need to be, which is in-person, sooner rather than later. Monday’s fine with me.”

Board member Donna Quattrocchi said she had originally been in favor of returning to in-person classes prior to the governor’s recommendation because of many of the same reasons House had listed as negative effects on students.
“They’re dealing with separation anxiety, they’re dealing with depression, we have the child abuse cases reported is down nationwide,” she said. “There’s physical issues that we need to be addressing with our special education children. They’re not getting speech therapy, occupational therapy, physical therapy as they should be getting.  “We have students that probably aren’t being fed the way that they would be fed if they were at school,” she said.
“But”, she added, “we’ve got legal issues as well.”

“Teachers aren’t essential workers according to our government, so if a teacher or school person gets COVID we’re liable. We can be sued, the school, as well as us individually.”
The legal issue stems from the immunity that school district employees and board members have in the course of performing their duties, but there are restrictions on those as well. If they go against the state’s recommendation to stay home, then they must completely follow the guidelines for going back to class.
Estes read advice that he had received from the board’s attorney on the matter.

“If we do not comply, and the way it’s been laid out in those conversations with KDE, commissioner of education, and this is the language that they use, the Healthy at School guidelines, along with other state and local departments, have to be followed at 100 percent,” he said. “So the Healthy at School guidance, if we do not follow this at 100 percent, there’s potential liability…”

“If you haven’t looked at the healthy at school guidelines, they’re pretty complicated, and my fear would be we would put an employee in a situation where they are liable because they couldn’t follow something, even though they were doing the very best that they could,” he said.
“I don’t usually run scared from litigation because I think you’ll never do anything if you do that, but the pandemic, the newness, the fact that nothing’s been litigated,” he said. “It’s going to be litigated. I don’t want it to be litigated with anyone here in Hancock County.”
Estes did provide one ray of hope, showing an online map of the state with each county colored green, yellow, orange or red, with each color representing a higher level of COVID-19 incidence rates over a seven-day period.
Estes said he believed that the map was the new method that the state would determine whether schools could return, and that if counties stayed out of the red they might be allowed to hold in-person classes after September 28.

Parents continued to push for a reopening, telling stories of having to drive five kids in a van to a hotspot so they could download their assignments, and of twin girls where one is falling behind due to the online learning, and of single parents who are unable to afford to pay for someone to watch their children during the school day while ensuring they do their work.
Nearly all of the board members voiced their opinion that they would not choose to return to school before the September 28 state recommendation, but Shane Ball, who was sworn in to his board seat to begin the meeting, said he felt that if the rest of the world could return to some sense of normalcy then the schools could too.
“I challenge people to go out into the county. This world has not stopped,” he said. “People are going to Bill’s, people are going shopping, people are going to the swimming pool at the country club, meeting kids and playing basketball down at the basketball court. My son just finished his baseball season at Vastwood.
“And all of that stuff to me is not more important than my kid going to school and getting an education,” he said, “so if you wanted to know my opinion, I 100 percent would send all four of my kids to school today.”
dave.hancockclarion
@gmail.com