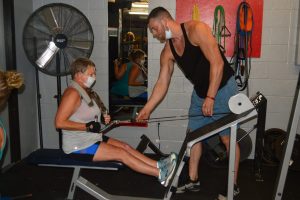 By Ralph Dickerson
As a small boy, Trevor Patton often accompanied his mother Janie Patton to her work at Pro Fitness gym in Prestonsburg, KY in Eastern Kentucky. She worked as one of the gym’s managers. He started going to the gym with her in the third grade, and in the sixth grade he started working out at the gym.
“I have not stopped since then,” Patton said.
Fast-forward to today, and Patton is achieving a dream by opening his own gym in Lewisport. Patton recently purchased the old Hancock Video and Tanning business in Lewisport, and converted the entire store to a gym. The new business, Hancock Fitness and Tanning, contains two gyms in one. The old fitness center portion of the location contains new commercial grade traditional iron weight machines, and the video store portion of the location now contains commercial grade cardio workout equipment.
“This is always what I wanted to do,” Patton said. “This was always a dream for sure.”
One of the first things he did when he began to consider purchasing the gym was to contact his father Darrell for advice. His father operated several businesses, and gave him tips and suggestions on how to proceed. The advice helped him as he considered whether or not to purchase the business.
Prior to Patton purchasing the business, people worked out at the gym on their own. Now, it operates as a full service gym with fitness classes and other services available. He offers personalized workout plans tailored to each person.
“We have a quick consultation,” Patton said. “Depending upon their goal and what they want, I base their plan on that.”
Some people may just want to work out, others people may want to build bulk and some people may just want to lose weight. The workout plans may include diet tips and/or supplements a person may need to take to help achieve his or her goal. In the group fitness classes people with similar goals are paired together during their workouts to help encourage them along.
The normal business operating hours are from 12 p.m. to 8 p.m., with the group fitness classes of the evening. When a person purchases a gym membership, 24/7 access to the gym comes as part of the package. A month-to-month gym membership costs $35, with a contract membership costing $30 per month. A person does not need to purchase a gym membership to join the fitness class. He offers this as a stand-alone option for $45 per month.
Patton possesses nearly 20 years of experience as a body builder. In high school he was tall and skinny and weighed only 160 pounds. Though body building, he now weighs 270 pounds. In addition, he competes in body building contests.
“I have competed over 20 times,” Patton said. “I have won my class three or four times.”
Patton fell in love with bodybuilding while working out at Pro Fitness as a kid. The owner, Don Fields, competed professionally, and Patton idolized him.
“He was the first person I saw that looked way above average,” Patton said. “I wanted to look like him growing up. I always looked up to him.”
Though he hails from Eastern Kentucky, Patton moved to Owensboro a few years ago to be near his children. Earlier this year he learned Hancock Video and Tanning was for sale, and he took a huge gamble and purchased the building. Patton said he was in the right place at the right time.
The gamble came about in this manner. Patton took most of his savings and purchased almost all of the commercial grade workout equipment from two gyms that closed in Louisville. Since the gyms needed to liquidate the equipment rapidly, he managed to purchase the items significantly below market value.
“I took almost all of the equipment and resold it at its market value,” Patton said.
The money he made from the sale of the equipment allowed him to purchase the old Hancock Video and Tanning location. He also kept some of the equipment to place in his new gym. Being commercial grade, the machines are much sturdier, which is a change from the equipment formerly in the gym.
“Some of the older equipment was made for the home,” Patton said. “It was not as sturdy.”