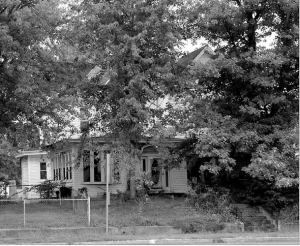 In the ongoing campaign against dilapidated and abandoned buildings in the city of Hawesville, most agree that the starting point is enforcing ordinances on the books, but Planning and Zoning Administrator Jeff Dame says he’s not sure the city or the county have the ordinances in place to begin that process.
Dame, who is the building inspector and code enforcer for the zoning board, said he isn’t aware of any ordinance that could be enforced related to abandoned buildings, but he added that those wanting him to enforce such laws are asking the wrong person.
“As far as this office is concerned, we don’t have any jurisdiction,” he said. “I work for the board and we’re kind of like a contractor to the county and the cities.”
His authority has nothing to do with existing properties.
“It’s all on new construction,” he said. “It has nothing to do with existing properties or condemnation or making people make repairs… The only time we get into existing is if somebody would add on and then it would only be the addition that we’d look at, not the existing structure.”
To begin to force a property owner to clean up a deteriorating or abandoned building the city or county would need what Dame called an existing structures code, or an ordinance aimed specifically at regulating buildings.
“It basically is going to allow the government to require people to keep their buildings up,” he said. “
Existing ordinances might deal with trash or junk, but he said they need an ordinance that explicitly deals with structures, which can either be basic or very detailed.
“When you start from scratch and do these ordinances, you can write them any way you want,” he said. “You can include anything you want, you can not include anything you want. I would prefer something less restrictive than more restrictive.”
Some have expressed worries over becoming like nearby Owensboro, which some say is oppressive in its ordinances, but Dame said the city or county could build in exemptions or whatever they wanted to make it reasonable for all citizens.

“There’d be exemptions, and you’d make it less restrictive for people living on larger tracts of land away from other folks,” he said. Even within Daviess County there are differences in how structures are handled.
“In Daviess County, the structure actually had to be falling down to condemn it,” he said. “I mean if the porch was falling off that’s not enough. If there’s a hole in the roof, that wouldn’t be enough to condemn the property. Now the city of Owensboro, they condemn structures for I think pretty much anything almost.”
Along with the ordinance, there’s also leeway given to the inspector.

“Discretion for the inspector is important because they could go to one of these yards that have a lot of concrete ornaments in the front. Well, to some people that may be trashy but to other people, hey that’s wonderful,” he said.
“It depends really in a nutshell on what the community wants as far as what do you want this community to look like? Obviously it’s not going to be Beverly Hills or somewhere because the money is a problem and people have different ideas on what their house or their yard should look like.”

“Building inspector is just a title,” he said. “They could just have somebody who enforces their ordinance… They could call them an enforcement officer and designate whoever they wanted to, really.”
Ordinances like those that regulate buildings and properties can have a wider impact than just on the structures targeted, but can improve the larger area.
“If people take pride in their own yard and they keep it up and they keep it clean, then their neighbors tend to do the same thing,” he said. “It’s an amazing effect.”
dave.hancockclarion
@gmail.com