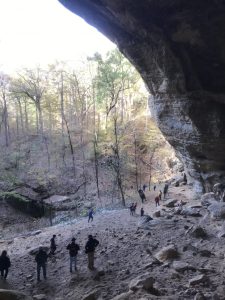 By Ralph Dickerson
Work to improve the Jeffries Cliff Park continues with several different projects ongoing. The projects cover several different areas of the park. One of the projects allows hikers to access the trails on top of the cliffs.
“We are going to put some temporary ladders and stairs at the Mossy Gap area to help get people on top to the trails up there,” Hancock County Heritage Commission President Steve Canepari said. “We’ve poured some concrete.”
Canepari said workers might wait until later in the year to finish the project due to the extreme heat. Canepari said he hopes the workers manage to get the stairs project finished before the end of the year.
Workers Joey Powers and Kyle Hodskins also created an access road to the top of the cliffs to allow them to take equipment on top of the cliffs to work on the trails. The new access road allowed workers to perform needed maintenance to the top of the cliff, such as mowing the top and cleaning up trails.
“Joey Powers did the mowing on top,” Canepari said. “We are going to make a trail over to the east side.”
Canepari said over 47,000 people visited the park’s Facebook page. Currently the hiking hours are Friday, Saturday and Sunday from sunrise to sunset.
“If they are organized groups, we can make arrangements for other days,” Canepari said.
He also said due to the thick foliage in the park, the best time to view Morgan’s Cave and other sites in the park is when the undergrowth dies down. He said the optimum times to sight see are late fall and winter.