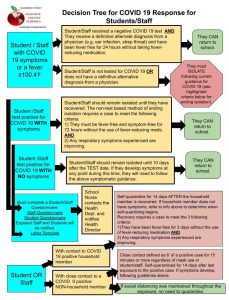 Hancock County Schools released its plan for the upcoming school year last Thursday, offering both in-class and remote learning options, while other details were merely hinted at in the information posted to the school’s website.

The traditional option is just what it sounds like, students will attend five days a week and classes will be as normal as they can possibly be, given the restrictions due to COVID-19, with classes starting August 26.

The virtual option is available for parents and students who don’t want to return to school for health or other reasons, and they will work from home on a district-supplied computer.

As of early this week, online registration showed that a vast majority of students were planning to return to in-person classes.

“We’re averaging probably between 70 and 80 percent of our kids right now, based on online registration, say they’re coming to school and about 20, 22 percent (virtual),” he said.

Parents waited eagerly for information to be released last week on how kids would be kept six feet apart while in class and while at lunch, whether they’d be checked for the virus daily, and how things like playtime in the grade schools would work.

Some of those details were left vague, but Poole said some of the information would continue to be released as it was solidified, but also specified by school.

“We’re going to be linking schools,” he said. “So when parents eventually click on traditional learning or virtual learning or whatever it may be, then they can go to the North Hancock, or to the South Hancock page linked off of that that gives more detailed information.

He said he understands that parents and the community want more detailed information, but the district is only giving out as much information as it believes it can stand behind.

A “new normal task force” has been meeting weekly for the past month to determine how students would return to school, but with state guidance on the virus changing, some of the decisions they need to make can’t yet be made permanently.

“We’re a month away in a world of uncertainty,” he said. “And to be able to answer every small question about what it’s going to look like, I wish we could.”

Some things are known, however, and at least one thing has changed since the information was first released.

Originally students who chose virtual learning would not be allowed to participate in any extracurricular activities, including all sports.

“That’s being changed. They’ll be able to,” he said.

At first the district determined that if students were staying home due to health concerns, those same concerns would preclude them from participating in sports.

“But we got to looking at some individual situations and each kid’s situation is so unique based on their home circumstance and their parent working circumstance, or whatever the dynamic may be,” he said. “Then the decision was made to go back all right, let’s step back and change that because a one size fits all is not going to work for all of our families and kids.”

Other things have remained constant for a long while, like the use of masks, which will be required any time students aren’t able to stay at least six feet apart and always while riding the bus.

Parents are encouraged to provide masks for their students, but Poole said the district will supply them for any student who needs it.

“All I can tell you is I can promise every kid at school who needs a mask, every day, will have one,” he said.

When asked whether students would receive a new one each day, or whether there were rules regarding how they handled or cleaned ones the students provided, he said some of those rules are still being clarified.

“This is unusual and strange and frustrating in a lot of ways,” he said.

Kids will be able to eat breakfast and lunch at the schools, and some schools are exploring the use of other rooms or even the outdoors to spread students out.

And every day, every student and staff member will have his or her temperature taken with an infrared thermometer before entering the building.

To overcome the lack of good internet in the county, the district is providing Chromebooks to any students working from home who need them, and they’ll be able to receive the materials through thumb drives if they can’t get them through the internet.

“We want to reduce as many barriers as we can for them to be able to learn if they’re at home,” he said. “Get them the right device, if we need to deliver thumb drives, whatever we’ve got to do. We want to reduce those barriers for kids and families because it’s tough on everybody.”

Those virtual students will be assigned to a teacher, who will ensure that they’re working every day and making progress to meet the much higher standards this year compared to last year’s NTI.

“It’s going to be more rigorous and more challenging, and there’s going to be higher expectations than there were for kids and their involvement,” he said. “There has to be. If not they’re losing out. They’re falling behind if we don’t do that.”

But whether students are at the school or at home, Poole said the year’s success comes down to the effort put in by staff and students.