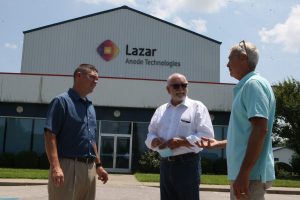 Some of the closely guarded secrets behind the experimental carbon baking technologies at Lazar Anode Technologies now lie in a pile of rubble behind the building, which is getting a new public persona and promising to be anything it needs to be to nurture a new tenant to success.
Owensboro Warehouse Leasing, LLC, made up of a trio of unnamed investors, bought the vacant Lazar building at 1765 River Road about six months ago, just three months after the tech company stopped developing its continuous carbon baking furnace column and the owner moved out of the country. This same group also bought the former GE manufacturing plant in Owensboro.

“When we first toured the facility we weren’t allowed to take pictures or anything like that because of proprietary equipment and secrets, I guess,” said Jim Estes, the leasing manager for OWL. “There were a couple of machines in here that they requested that we dismantle, which we did and took care of getting those out. They took some stuff out. I don’t really know what it was that they took out.”
The group bought the building as an investment with a plan to lease it to a new tenant, so the vertical furnace was demolished to make the building more suitable for potential lessees.
“It had the furnace in it that was very specific in need that we obviously, or nobody else probably would need,” he said. “The rest of it was pretty much empty except for a few desks and chairs.”
An overhead crane was left in place for industrial tenants, since the group saw potential in the building’s location near the county’s industries and in the industrial environment in the county.

“It was just a really unique opportunity,” Estes said. “It would either be a spinoff company for an aluminum entity that’s already here, or this part of the county or this part of the state is kind of known for a lot of the manufacturing and industrial stuff, so whether that be creating something new or maintaining something old, this facility kind of fits that.”

But the owners aren’t looking solely at industrial options. “We don’t care what it is,” he said. “If somebody wants to get in there and sell widgets, we’re really good with that.”

While it’s zoned industrial and was built to withstand the rigors of the overhead crane, Estes said the style of the 10,000 square foot building could be attractive for a wide variety of businesses.

“The facility is state of the art,” he said, describing it as modern industrial inside. “Some small startup company could come in and really make an amazing first impression.”
“Honestly if the facility itself were in Owensboro I would move my real estate office to it and probably put a climbing wall in the back, something silly like that, kind of go all Google on it,” he said.
dave.hancockclarion
@gmail.com