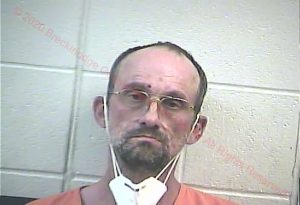 A former Hawesville man was arrested Sunday after police say he purposely crashed his car into a ditch to hurt his wife, and then fled the scene taking the couple’s cat before breaking into a nearby church and smearing blood on the inside.
Richard Carl Voyles, 51, who currently lives in Saint Ann, Mo., was in town visiting family Sunday afternoon when authorities say he apparently grew angry at his wife as he drove down KY2181 and he steered into a ditch in front of Blackford Baptist Church.
“The wife stated that he looked at her and told her that he was going to end her or take care of her, some words like that and then purposely just cut the wheel off the road…” said Hancock County Sheriff’s Deputy Jeff Hendrick, who worked the incident.
Police arrived and found Voyles’ 1994 Honda in the ditch with his wife Stacy Ann inside, but no sign of a driver.
“He was actually somewhere hiding in the woods,” he said. “We looked for him, didn’t find him and then we went down to treat the female and make sure she was OK and get information from the female.”
Voyles had left the crash site and left his wife behind, but he didn’t go alone.
“Whenever he fled the scene he took a cat carrier containing a calico cat,” Hendrick said.
Sometime after police arrived, Voyles broke into the church through a back door.
“He busted the back door of the church and went into the church,” he said.
While inside he did more damage.
“He had cut his hands whenever he went in and he appeared to purposely cut one of his other hands and he sat in the chairs up front where the priests and stuff are,” he said. “He had bled all over those and bled all over inside the church and in the kitchen areas and stuff like that.”
Voyles also damaged clothing used in the services.
“(He) took his clothes off and put on one of the server’s robes,” he said.
Hendrick and Sheriff Dale Bozarth were able to enter the church and arrest Voyles, who was found with an empty cat carrier. He was taken to Owensboro Health Regional Hospital to be evaluated, but not before damaging the police cruiser by smearing blood inside and kicking the roof. He was evaluated and released to police custody.
Voyles’ wife wasn’t seriously injured in the crash and was checked out by an ambulance but not transported.
There’s no indication Voyles was under the influence of drugs or alcohol, Hendrick said, but was apparently just angry.
He was taken to Breckinridge County Detention Center where he was released earlier this week after posting a $10,000 cash bond.
Voyles is facing felony charges of wanton endangerment, first degree, burglary second degree, and criminal mischief first degree, as well as misdemeanor charges of criminal mischief second degree and leaving the scene of an accident.
As for the cat, Hendrick said it remains a mystery.
“We’re not for sure where the cat is or what happened with the cat,” he said. “The cage was in the church with him where he was sitting, but the cat wasn’t.”
dave.hancockclarion
@gmail.com