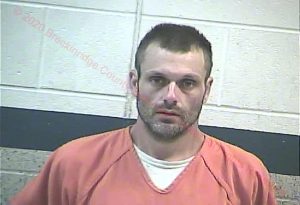 Hancock County’s top dog Artus earned his keep Friday by tracking down a man facing a lengthy prison sentence for serious sex crimes who’d fled on foot from police and disappeared into the thick brush.
Artus, a K9 officer who works alongside his handler, sheriff’s deputy Gary Mattingly, was able to track Bradley Ryan Steinhauer, 37, through the countryside after Steinhauer fled when he realized he’d been recognized by another officer.
The incident began Friday afternoon when 911 received a call about a suspicious man on KY1389 and sheriff’s deputy B.J. Burton responded.
“Deputy B.J. received a call of an individual that came out of the woods that was all scratched up,” said Mattingly. “The caller said that this individual didn’t have any shoes on, had no shoes and no socks and was all scratched up and made a comment that his car broke down, but yet doesn’t want us to call the police.”
Burton arrived and found Steinhauer, who attempted to hide who he was.
“He kind of shielded his face so he wouldn’t identify him,” Mattingly said. “At that point Deputy Burton knew who he was so he knew he had some probation violation warrants against him.”
Once he realized that he’d been recognized, the situation escalated quickly, with Steinhauer making an aggressive move toward Burton and getting tased.
“That’s why he deployed his taser,” Mattingly said, “because he actually told him stay back, and he would not. He tased him and then he took off and then he ran in the woods.”
With a suspect on the run, Mattingly arrived and Artus was called into action.
The K9 tracked without a harness, free to sniff out the suspect, while the officers kept their eyes out for broken branches and disturbed grass that might point to where the man had gone.
“And we did find stuff so we followed that path,” he said.
Temperatures reached above 90 degrees and the officers were not keen on searching too long, but they continued to follow the clues. They came to a clearing with thick brush on one side and a barbed wire fence on another.
“It’s hot so at this point we’re thinking OK, where’s he at?” he said.
“So I can see Artus’ head kind of go up in the air. I mean he’s air scenting,” he said. “So I’m like he’s here somewhere. He’s close.”
“I said hey, what was he wearing?” Mattingly said.
Burton was beginning to describe Steinhauer’s shirt and his reddish pants as Mattingly looked around the area.
“I’m like, you mean like that? And there he was,” Mattingly said.
There he was, hiding in the thick brush, but still unwilling to come out.
“At that point we were calling him out to come out of the brushes and he wouldn’t,” he said. “I’m like, I’m telling you, you’re going to get bit if you don’t.”
“At that point I couldn’t see his hands. They were underneath the bushes and stuff like that and I’m like, OK fine. I will send him in and get compliance and then make the arrest,” he said.
Steinhauer continued to refuse to come out.
“I’m like, OK, you’re going to get bit. I’m going to send in the dog. And here comes Artus after him,” he said. “At this point he realized that K9 Artus was coming right beside him, was coming towards him, he saw him and his whole demeanor changed, like, please, please, please don’t let that dog get me.”
Artus did his job and the officers were able to arrest Steinhauer and take him into custody, where he’s facing sentencing on several felonies including multiple counts of sexual abuse first degree, sodomy, and charges of indecent exposure, unlawful transaction with a minor, and several drug charges.
Despite the advantage of having a sunny day, the heat would’ve made for a challenging chase with no guarantee of ever finding him.
“If it was just (Burton) and I going man, it’s just hot, we’re going to back to the car,” or “if he would have hid really, really well, which he did, we may have missed him,” he said.
“In dead of daylight right there you can look for signs of crushed vegetation or disturbed earth or whatever it might be but K9 Artus with his nose, it’s just unmatched to anyone…  You know, when he was throwing his head, he smelled him before we even got close to him.”
dave.hancockclarion
@gmail.com