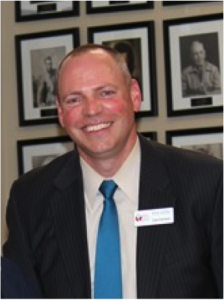 The Hancock County School Board voted to sign superintendent Kyle Estes to a new four-year contract at its June meeting, restructuring his pay and eliminating the merit bonuses in his previous contract.
On a night where the board gave Estes a glowing employee evaluation, the board voted to approve a contract with a $120,000 base salary with a minimum $3,000 raise each year, in addition to a $650 monthly car allowance, a provided computer and cell phone, and 5 percent of his adjusted base income paid to an investment chosen by Estes. He also gets the same retirement benefits as other certified employees.
Estes’ base salary for the most recent school year was $134,000 after starting with a base salary of $125,000 in 2016 and getting minimum $3,000 raises beginning in 2017. While the lower base salary in the new contract seems like a pay decrease, the board restructured his compensation package to reimburse him for his retirement contributions, resulting in a small net pay increase for the coming year.
“He was interested in us contributing to his KTRS fund, the teacher retirement,” said board chairman Allen Kennedy. “We weren’t able to give the teachers a raise and he didn’t feel like a raise was appropriate. We felt like a raise was appropriate for him.”
Merit bonuses of up to $2,000 a year that were in the 2016 contract were removed because the standards for evaluating a school district’s performance were always shifting.
“It’s kind of hard to catch a moving train, from the standpoint of something that’s constantly changing,” Kennedy said.
The state often changes the way it measures performance and even the categories it measures, so much so that recent state evaluations have been given less significance by the local board since there’s no way to measure one year against another.
“It was just so hard to put a tangible figure, so to speak, to those kinds of things,” he said. “A few years ago we thought that was a good idea but as it turned out it wasn’t as good an idea as we thought it was.”
Estes’ 2019 salary was right at the state average, which is $133,941. According to the Kentucky Department of Education, all but nine superintendents of the 171 school districts in the state made six figures last year, with the highest paid being in Jefferson County at $278,123.