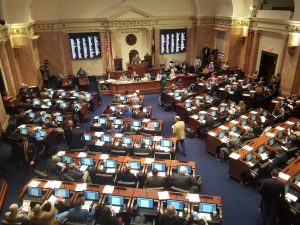 FRANKFORT – A common misunderstanding about the legislative process is that all new laws take effect when the governor signs them.
While that assumption is understandable, the truth is that most laws are not official until 90 days after the General Assembly adjourns.  During even-numbered years, when Kentucky’s constitution requires legislators to complete their work by April 15th, that enactment date traditionally falls on July 15th.
There are some exceptions.  A law may have a specific date it takes effect, or it may be effective immediately when there is an emergency — and no emergency in modern times has been as widespread or as long-lasting as the one caused by the coronavirus.
It arrived in Kentucky in March, the start of the General Assembly’s busiest month, and it didn’t take long for its impact to be felt.  It reduced our working calendar by seven days; it kept the public from even being in the Capitol; it forced the legislature to budget for a single year instead of the traditional two; and it even altered how we in the House voted, because there was no way to safely have 100 members in the chamber at the same time.
Nevertheless, the session ended with a longer list of accomplishments than might have been expected when the country began closing down.  To address COVID-19, for example, we immediately expanded access to unemployment insurance and eased rules for companies that switched production to manufacture emergency supplies.  We also gave schools more flexibility to teach and feed their students at home.
Beyond the pandemic response and a bare-bones budget, we approved quite a few other new laws that will be beneficial to Kentuckians.
Our public health departments, for example, will get a boost thanks to a new law that will have the state shifting dollars to more rural areas while calling on the departments to focus more on their core services.
In another important healthcare matter, physician assistants were given the green light to prescribe controlled substances.  Kentucky is the last state to make this possible, and I’m glad we could get this done because of the important role physician assistants play.
Cities and counties have long asked for more oversight of their public retirement system, and now they’ll have it.  This new law won’t completely separate their plan from Kentucky Retirement Systems, but it will give local governments much more control over their own investments.
Economically, one new law now makes it possible for distillers and other manufacturers of alcoholic beverages to be able to ship their product directly to customers.
More broadly, employers will soon have more tools to help those working for them who are addicted to drugs and are trying to turn their lives around.  This is a voluntary program, but hopefully will become widely used.
Another new law will give rural hospitals access to economic development loans that could be the difference between staying open or closing.  This is modeled after a separate law this year that helped the University of Louisville with its purchase of Jewish Hospital.
The legislature also made it possible for those on probation to take positive steps that would reduce their time under state supervision, and we created a new program that gives incentives to state employees who become a living-organ donor.
Two bills to pass the legislature are still unresolved because they’re constitutional amendments needing voters’ approval in November.  One known as Marsy’s Law would give victims more of a voice in their criminal cases, and if it seems familiar, that’s because voters approved it two years ago.  However, the Kentucky Supreme Court ruled that the ballot language then was too vague, which means it has to be voted on again.
The other constitutional amendment is also rooted in the legal system.  It would lengthen the terms of district judges and commonwealth’s attorneys to eight years, beginning in 2022 and 2030, respectively.
In a way, the official enactment of these laws is the true end of this year’s legislative session.  The General Assembly’s committees have already begun looking ahead to 2021, however.  No laws are passed during these interim meetings, which began a little over a month ago, but this time will give legislators and the public alike time to review issues before the next session begins in January.
If you have any thoughts about these new laws, or what changes you think are needed looking ahead, please let me know.  My email is  HYPERLINK “mailto:[email protected]” \t “_blank” [email protected], and the toll-free message line is 800-372-7181.