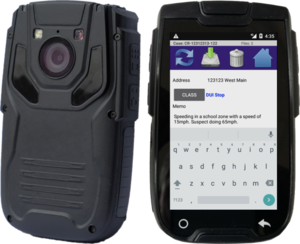 With increased scrutiny over police conduct and widespread calls for de-funding police in several major cities, the use of body-worn cameras could offer a solution. The public wants police to have them and police themselves say they want them, so why don’t they have them?
“It’s just not as simple as buying a camera and wearing it,” said John Garner, Lewisport police chief. “It’s a rather expensive item even though it doesn’t look like it… Everything you have to do to keep up with it and make it legal in today’s world is extremely expensive.”
The cameras themselves aren’t cost prohibitive, but the rules that come with them are oppressive to the point that most small departments can’t afford to have them.
“I wish we could all just throw cameras in the cars and on ourselves and lock it up in a drawer in the office here and call it good, but that’s not the way it is in the real world,” said Hawesville Police Chief Mark Powers.

Everything that gets recorded becomes evidence and must be handled as such, meaning it must be stored and safeguarded for years to preserve chain of custody, meaning a dedicated server and equipment exclusively for that use. And, any video that is going to be released to the public must be heavily edited to remove any traces of personal information and any appearances of anyone not directly related to the incident.
“Like if I’m going into a house, you’re walking down the hall and it’s got pictures of the families on the walls, you have to have that deleted out,” Powers said. “Audio, people’s private information, they’re talking to you giving their date of births and social securities, you have to the audio taken out of it.”

Editing the audio and video and operating a dedicated server for storage would require a person knowledgeable in those subjects and with the time to do it, which Powers said doesn’t work at one-man departments like his.
“I have to do everything so I don’t have time to do the IT side of it and go to computer schools and learn that,” he said. “So you’d have to hire a technician to do it and the cost is just too high.”  That technician would have to be vetted carefully, but they’d also be called to testify in court, meaning the department would be paying them during hearings.

Prior to 2018 change in the law, anyone in the public could request any and all videos from police departments under the Freedom of Information Act and the departments had to make them available, albeit fully edited.
“Before that came out, if somebody just wanted to be a pain in a police department’s butt, just for the meanness of it, they could sit there and file discovery on every single audio and video evidence you have,” he said. “That’s every traffic stop, every call you go on, every interaction with the public where you’re called for service… So a one man department like me, that’d be all I’d do for an entire year if somebody said I want all your videos.”

Now departments are given some discretion on whether to turn over video to someone not associated with an incident if they think the person is just being nosy or doesn’t have a legitimate need to see it. Cameras have been used in the county before in police cruisers and the sheriff’s office even experimented with body cameras.
“I had some at one time, some little cheap ones,” said Hancock County Sheriff Dale Bozarth.
They clipped onto the deputies’ shirts and because they were cheap they wouldn’t stay straight and were problematic so they stopped using them.
But when Bozarth first began as sheriff more than 20 years ago the cruisers had Docucam systems, which recorded audio from a mic worn by the officer and from a camera mounted in the car. It was recorded onto a VHS tape that was inside a locked box in the trunk and only Bozarth had the key, to prevent officers from accessing it.
“That was a great system,” he said.
As technology progressed it became more and more difficult to find someone to service them, so they eventually took them out.

While he’d like to have cameras, and they’re recommended for police departments, Bozarth isn’t planning to run out and buy them and take on the ongoing expense.
“I have to be a good steward of your money, so I don’t mind to get them but somebody’s going to help me pay for them,” he said. “When the mandate comes down that says you have to have them, of course we will go to them, but when that happens we’ll also get funding probably to help buy them.”

Grants might be available for the equipment, but Garner said that would only be enough to get the program started and wouldn’t help for the ongoing costs.
“You’re talking about having to hire an employee, having to buy equipment, having to keep it up, and as long as you’re going to have cameras then you would have to have at least a very minimum of one person to do nothing but keep up with it… So that’s an expense that won’t go away,” he said.
And even using cameras for a trial period of time and then deciding to stop would mean several years of maintaining and protecting the videos shot during that time, and editing any that get released.

If police are prevented from recording incidents, the same is not true for the general public, as demonstrated by well-known video of a Minneapolis police officer kneeling on the neck of George Floyd and causing his death, for which he has been charged. The heads of all three Hancock County departments not only believe citizens should be able to record, but they believe it can actually help the departments.
“They can record, it’d be great,” said Powers. “It’s definitely beneficial for us.”
A video recorded by a citizen can even be better than a body camera, he said, because the body cam only faces straight and doesn’t pick up what’s on either side and what an officer might be reacting to.
“So somebody sitting back with a phone does get a better angle,” he said.
“It just gives you a good idea of what happened on the scene,” said Bozarth. “If you can use it in court everybody sees exactly what happened. There’s no doubt.”
“I’ve had people tell me before tell me that we’re recording this or whatever and I say I’m glad you are, I hope you do because it’s just as important to me as it is to you,” said Garner.
“You have to make sure you get the entire footage because there are those that they’re going to put the part up that benefits their side of the story better than anything,” he said. “Of course they’ve already tried you in the court of Facebook by then.”
dave.hancockclarion
@gmail.com