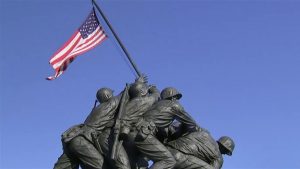 FRANKFORT – Independence Day may not be the oldest holiday originating in our country – Thanksgiving holds that title – but no other day defines the United States better than the Fourth of July.  It was on that day, 244 years ago this Saturday, that we declared to the world we were going to govern ourselves.
Not everyone thought the Fourth would be remembered as prominently as it is now.  Founding Father John Adams believed July 2, 1776, was more important, since that was the day the Second Continental Congress actually voted to break away from Great Britain.  The Fourth was when the Declaration of Independence was adopted.
Since that historic week, we have weathered a war for freedom, a war against ourselves, and wars against those who would like nothing more than to see us fail.  Although the world has changed in countless ways since those early days in our country’s history, the core values that bind that era to ours remain very much the same.
Many may think the same people who signed the Declaration of Independence were the same ones also behind our Constitution, but that’s not true.
In fact, only six people signed both, and the most well-known of those was Ben Franklin.  Among the other Founding Fathers, George Washington was serving as commander of the Continental Army in New York when the Declaration of Independence was finalized, while Thomas Jefferson and John Adams were ambassadors in Europe when the Constitution became official.
Kentucky, of course, was not one of the 13 original colonies, but as part of Virginia, it did have a part to play in our country’s early years.  To begin with, there were several skirmishes here during the Revolutionary War, including one of the last: The Battle of Blue Licks in the northern part of the state.
While that fighting occurred after the war was largely over, it was still a devastating blow for our early settlers.  Among those killed were Colonels John Todd and Stephen Trigg – who were later honored by having two of our counties named after them – and Daniel Boone’s son Israel.
We have several other ties to Independence Day and the American flag that symbolizes it.  What is believed to be the holiday’s first celebration west of the Allegheny Mountains, for example, took place in Central Kentucky in 1794.
The most iconic photo from World War II – the raising of the American flag at Iwo Jima – features a Kentuckian among the six Marines pictured.  A Kentuckian was also the first soldier to plant our country’s flag on foreign soil.  That moment is best remembered in the second half of the opening line of the Marines’ Hymn: “From the halls of Montezuma to the shores of Tripoli.”
In more recent times, Kentucky played a role in protecting the Declaration of Independence during World War II.  Because our country’s leaders wanted it to be more secure – and away from a potential attack on Washington, D.C. – the historical document was taken first to Louisville in 1941 and then to Fort Knox, where it stayed until being returned in 1944.
It was during that war that President Franklin Roosevelt gave a stirring speech reminding us what the Fourth of July meant to those fighting to establish our country.
“To the weary, hungry, unequipped Army of the American Revolution, the Fourth of July was a tonic of hope and inspiration,” he said.  “So is it now.  The tough, grim men who fight for freedom in this dark hour take heart in its message – the assurance of the right to liberty under God – for all peoples and races and groups and nations, everywhere in the world.”
We may be celebrating a subdued Independence Day this year because of COVID-19, but that doesn’t diminish the gratitude we have for those who dedicated their lives and livelihoods to establishing and protecting our country.
We honor their legacy by tackling the challenges we have today with the same spirit we saw in 1776.  “American was not built on fear,” President Harry Truman once said.  “America was built on courage, on imagination, and a determination to do the job at hand.”
We’ve faced difficult times before and overcame them, and I am confident we will do the same again as we navigate through these difficult days.  With that thought in mind, I hope you have a great Fourth of July.