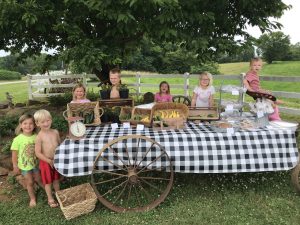 The Simpson cousins are putting in the kind of hard work reserved for strapping young men, but if you combine the ages of all five they’re still just 32.
Brothers Nick and R.J. Simpson and their wives Megan and Sue, respectively, have been teaching their young children to raise gardens, and this year they’re teaching them that the work can pay off by setting up their own farmers’ market.
The families are neighbors on Greathouse Road, where Megan and Nick’s kids Mckenzie, 5, Allie, 4, Mollie, 3 and Cambron, 1, sell produce alongside their cousins Ryan, 8, Peyton, 7, and Jase, 4.
“We decided this year, the kids, they really have been helping us, so we decided to do a little farmer’s market for the kids,” Megan Simpson said.
Both families have their own gardens and grow different plants.
“I have corn, tomatoes, zucchini, squash, cucumbers, green beans, watermelons, pumpkins, and sunflowers,” she said. “Sue has a huge garden. Hers is bigger than mine, and she raises corn, tomatoes, squash, zucchini, she’s got a lot of strawberries, she’s got spaghetti squash, cucumbers, and I think that’s it.”
Although they’re young, the kids have been helping out all season, learning early on how to work hard.
“All the kids have helped us plant the seeds,” she said. “And they go out every day.”
“We kind of have to encourage them to help pull the weeds but they really love picking the vegetables,” she said.
The oldest, Ryan, loves helping in the garden and helping himself.
“Ryan, he’ll go out there and he’ll eat four to five cucumbers out there in the garden,” she said.
With all of the work, the families thought it would be good to also teach the kids how to sell at the county farmers’ market, but like many things this year, that was derailed by the pandemic.
“We had called about that farmers’ market but with all the COVID going on we’re doing it at Sue’s house,” she said.
Their first sale was Monday, and it was a success.
“We also baked zucchini bread and little pies and we sold every single thing,” she said.
There’s no set schedule, but Megan said that Monday seemed to work and is a good day for both families, so that might be what they decide.
All the hard work will pay off for the youngsters soon.
“All the money, we’re going to split it up for our kids,” she said. “And if they want (they can) pick out a toy or something, but we feel like it’s teaching them hard work to get out there and pull weeds and pick the vegetables and then they see that their hard work is paying off by selling it and saving money.”
The kids’ farmers’ market is at 1798 Greathouse Road, near the intersection of Adair Road.
dave.hancockclarion
@gmail.com