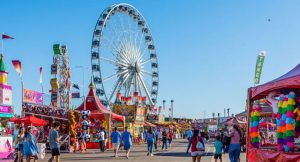 Hancock County’s award winning fair won’t be happening August 5-8 as originally planned, but the fair board voted in a special meeting Tuesday night to postpone the fair and move forward with the fair catalog that’s a requirement for getting state funding if they decide to have a modified version of the fair later in the year.

After originally canceling the fair in the regularly scheduled June meeting and nullifying that vote in a special meeting the next week and pushing the decision to the regularly scheduled July 7 meeting, the board moved that meeting up a week and held the vote on June 30 at the fairgrounds. “Hancock County Fair has been in the top 12 in the state several consecutive years,” board president Franklin Powers told the members. “There are other fairs, Hopkins County, Meade County and Hardin County that I know of, are also in that group of fairs. And those fairs are doing something.

“So I’m here tonight to ask you if you would be willing to try to do something rather than absolutely nothing,” he said.  Concerns over the COVID-19 pandemic have led to a rash of fair cancellations across the state, and the local fair board has debated whether to have the fair later in the year or even at all. Powers began the meeting by reading a letter from the company that would be providing the rides to the fair, which detailed the health checks and cleaning procedures commonly employed in the pandemic, and how everyone entering would be given a neon arm band to signify they’d passed the health check.

But the letter also explained that the fair could follow CDC guidelines for social distancing and still have a much larger crowd than some might think. The letter pointed out that the six-foot distancing guideline means each person would require a 36 square foot area, meaning approximately 1,200 people could fit on each acre. That distance isn’t enforced for family units, so a family of three could each fit into that same space.

“You can average three guests per family and 1,200 people can fit into one acre with proper distancing, the letter said. “If you multiply that by three people per family that would be 3,600 guests at one given time.”
Powers said the fairgrounds overall is more than 20 acres but that maybe five are available for people to stand.

“Even if we’re allowed 3,600 people, I can’t see us social distancing 3,600 people,” said board member Julie Rucker.  Member Karen Colbert, the one designated to monitor the regulations related to the virus for the board, told the board that the Healthy at Work requirements released by Governor Andy Beshear on June 8 allowed some public attractions to open with limits, but that a footnote said that fairs “shall remain closed until additional guidance and dates are announced.”

Limits on public gatherings stood at 50 as of Tuesday, with the expectation that the number would rise to 250 people in August as restrictions in the state ease.
“My hope had been that everything would change by the time we got to August, but I don’t see it changing,” Powers said.

Powers had fought hard to reverse the decision to cancel the fair until as late as possible, but he acknowledged Tuesday that it wasn’t looking good for having a full fair very soon, and he understood that the board was in favor of canceling for August. “I think I get a consensus here that most people are going to vote no, to cancel it, and that’s fine. I’m not asking nobody to vote yes, OK,” he said.

Several members voiced their worry over being blamed if attendees later test positive for the virus, even if they contracted it somewhere else, while others worried about doing what they could to prevent its spread even if it meant canceling.

“I love the fair and it’s a great thing for the community,” said member Scott Basham. “But I’m going to tell you, if something happened and a bunch of people got sick, I wouldn’t be able to go to sleep at night.”  Several members tossed out the idea of having an event in September or October, some calling it a fall festival and others saying it could be just a smaller version of the fair.

According to the Kentucky Department of Agriculture, which governs the fairs, the board can still get financial support on a rescheduled fair if the board’s initial request for aid was approved, but that the board is required to submit a copy of its official catalog by December.
Boards can also apply to spread the usual three-consecutive-day fair across several weeks or even months, holding a “split-date fair.”

With the possibility of some kind of event this year, Powers said the board needed to vote that night whether to have Hancock Clarion publisher Donn Wimmer continue to work on the fair catalog, which is a requirement in order to get reimbursements on payouts in the agricultural events.  After some discussion over what events could still be held and how uncertain the future dates would be, Powers added another element to the decision.

“These fairgrounds belong to Farm Bureau,” he said. “And it says in that lease agreement that we’ve got, that if you don’t have a fair, the fairgrounds goes back to Farm Bureau.”
Powers added that board member Tim Cecil, who is also president of the Farm Bureau board, said he didn’t think canceling this year would cause a problem.
“Tim says well maybe not in this situation, but it doesn’t say anything in that lease about a COVID-19 or coronavirus or a two-day fair or a three-day fair. It says ‘don’t have a fair,’” he said. “That’s why we need a fair catalog, to protect our lease agreement.”

Even if the local Farm Bureau puts it in writing that they waive that stipulation for this year, Powers said he worried that not having any kind of fair this year could hurt future grant applications with the state, which most recently funded the new livestock building.
“I think we would need something because when it gets to the state they make the rules,” he said.

Wimmer suggested that he could continue to work on the fair catalog content and leave the dates and specific events blank until the board finalizes a decision in future meetings.
After an anonymous written vote, the board voted 11-3 to proceed with the catalog.
Immediately following that vote, the board voted 10-2 to postpone the fair.
Future decisions on when the fair will be held and in what way, or whether it will be held at all, will be made in future fair board meetings.
dave.hancockclarion
@gmail.com