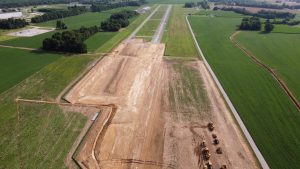 Construction is underway on the extension of the runway at the Hancock County Airport, a project that will allow jet traffic and bring more revenue for the airport and potentially more business to the county.
Lutgring Brothers, out of Tell City, Ind., began work last week on the $1.2 million project that will add 1,000 feet to the existing runway, to bring it to 5,000 feet.
The extension is part of a $2.5 million project, which included the purchase of adjacent farmland, and 90 percent is paid for with a grant from the Airport Improvement Program from the Federal Aviation Administration (FAA), with the remaining 10 percent split between the state and the Hancock County Fiscal Court.

Having a 5,000 foot runway opens the airport up to larger planes, which are often used by industries visiting the county, who currently have to land at other airports like Owensboro and drive to the local plants. The original 4,000-foot runway was a choice of necessity, not preference, when the airport opened in 2008.
“We knew in the very beginning before we started the runway to build the airport we wanted to go with 5,000 feet, but at that time we couldn’t get the land,” said Clarion publisher and former airport board chairman Donn Wimmer. “We couldn’t get the land then so we decided to go ahead and go with 4,000.”
They continued to push for funding for the extra length and finally got the first grant to study the engineering of the expansion in 2015.

Eventually the airport was awarded the full grant for the purchase and construction, and bids were opened and awarded in June 2019. Lutgring Brothers was the low bidder, but they also had a history with the airport, having been the ones to build the current runway.
“The airport board was very pleased with the work that they did, so we were happy that Lutgring Brothers – and they’re local people – have got the contract,” Wimmer said.
Part of the contract is the relocation of a portion of Greathouse Road, but it also includes upgrading the lighting along the length of the runway, to add lights to the new portion and update the existing lights.
When it’s finished it will be a major benefit to the airport and the county, Wimmer said.
“I’ve talked to managers of other airports, in particularly the manager of the Greenville Muhlenberg County airport and he said they went through the same thing and when they extended their runway to 5,000 it made a huge difference,” he said. “More businesses even came in and he pointed them out to me.”

Bigger jets using the airport means increased fuel sales, which is part of where the revenues come from to run the airport. But the rest comes from renting spots in the hangars, which could grow too, onto adjacent land the airport owns.
“We do have land that we own around the airport where corporates could build their own hangar in the future if they wanted to locate here, as they did in Huntingburg. Corporates over there have their own hangars,” he said.

Area pilots have moved their planes to the county to rent hangar space because of the fair prices on rentals but also on the amenities in the airport terminal, like a conference room, pilot’s lounge, snack bar and even a stove.
“Everything down there is first class, and the place is kept immaculate,” he said. “A lot of people that have come here on trips have stopped here and said they liked the facility so much that they’re going to make it a point to come back here because it’s so nice.”
The runway extension is expected to be finished within 130 days.
dave.hancockclarion
@gmail.com