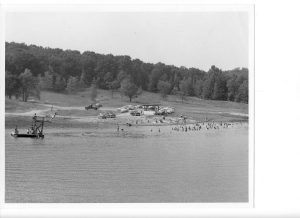 Vastwood Lake remains closed to swimming for the sixth summer after it was closed beginning in 2015 to improve the lake’s ecosystem, but many don’t realize that public swimming first started at the lake in 1958, long before it was a county park.
In 1958 Vastwood opened to the public by ingenious Paul Wimmer, who’d moved to Hancock County from Virginia in 1950, along with his wife Bernice and their children Donn, Dick and Patricia.
Wimmer bought about 100 acres along what is now Highway 60 and after trying to farm the ground, decided to invest a substantial amount of time and money to build a public lake with $20 annual memberships. The name Vastwood was suggested by his son Donn, inspired by the Vastwood Apartments where he and his wife Juanita had lived in 1955 in Artesia, New Mexico.

After Wimmer’s death in 1965 and then Dick’s death in 1970, Bernice Wimmer sold the lake to investors, who let it sit unused, before the county bought it in the 70s and built it to its current status along with adding many other features to the park. But the original lake feature now sits dormant again, closed by the ongoing battle with invasive weeds and an attempt to find a balance between making the lake great for swimming and great for fishing, when each one requires opposite characteristics.

The Hancock County Fiscal Court first voted in its April 2015 meeting to close the lake to swimming because treatments needed to kill off several invasive weeds and darken the water to prevent regrowth would make the water unpleasant for swimmers. The closure was called a one year test to see what could be done without worry of swimmers’ safety, but the process wound up taking several years and multiple methods.

Last fall the court discussed the possibility of reopening the lake to swimmers after receiving a positive report about the lake’s condition. “We had talked about it in the fall last year and we were considering opening the lake this year,” judge-executive Johnny “Chic” Roberts said Tuesday.
The magistrates had talked about progress on the lake and possible continued treatments depending on later advice from experts.
“But they didn’t have to do the spring drop of chemicals this year and we were considering opening for 2020 swimming,” Roberts said. Then COVID-19 struck and halted most of society, which included throwing a wrench into the county’s plans.

“Some of the lifeguard certification and some of that would have had to have taken place during the lockdown, and obviously COVID-19 changed that direction a little bit about what we were going to do,” he said.
So for this year, the lake is closed for swimming but remains open for fishing, and the beach is closed to the public.
“That gate is locked with the concession, so really the beach and the swimming’s closed at this point,” he said.

A volleyball court that was partially completed several years ago is locked behind that same fence and gate, but Roberts said the county might change plans on that to make it available for use. “The volleyball was originally put on the beach there and we’ve had discussions about maybe moving that beside the basketball court but nothing official yet,” he said.

Opening the lake to swimmers again will require lifeguards and staff to manage the daily operations, but Roberts thinks that’s a small hurdle to overcome.
“It wouldn’t be a great expense in my mind,” he said. “Especially if you can recover some costs from some of the charges that you have as far as fees to swim and concessions.”
One knock against the lake in recent years was that the majority of people swimming there were from out of town and out of the county, but Roberts believes that can be a good thing.“If it did bring people to the community or obviously introduce someone to Vastwood, maybe they spend some money at a local business. That’s always a positive,” he said.

Any decision on swimming for the summer of 2021 likely won’t be made until next year and will depend partly on the condition of the lake at that time, but Roberts said he’d like to hear what the public thinks about whether the county should reopen the lake for swimming or not.
“I don’t know how the community feels in general as a whole group about that. It’d be interesting to know that,” he said. “For the most part I believe, especially in local government, community involvement drives decisions. That’s how that goes for sure.”
dave.hancockclarion
@gmail.com