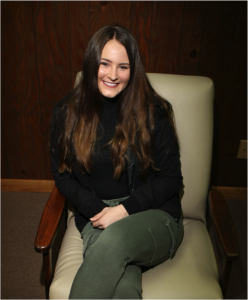 Haley Smith speaks with a wisdom that belies her youth, but at just 18 years old the Hancock County High School senior has experienced as much heartache as someone twice her age. She’s also faced that heartache with a determination greater than many could muster. Haley is graduating with honors from HCHS, but it was an early tragedy that brought her to Hancock County from her native Breckinridge County in the first place.

At 12 years old, as summer was ending and she was preparing to enter the seventh grade at Breckinridge County Middle School, her mom Crystal Horton was unexpectedly found dead at their Hardinsburg home. “She was only 34 years old so she was really young,” Haley said last week. “She didn’t have cancer, she didn’t have any kind of health problems.” What she did have was two jobs, two kids, and a fractured marriage to a man that Haley said was into drugs and was trouble. “She hardly ever had a day off and when she wasn’t at work she was sleeping, just exhausted,” she said.

Haley was home by herself one day in July while her mom was at work and her brother Connar was staying with his stepdad, when her grandfather Danny Garrison and his wife Denise knocked on the door and asked if she wanted to come stay with them for a little bit. He was a towboat captain and was gone for 28 days and home for 28, and he’d just gotten home and wanted to spend time with her. Being just 12 she didn’t have a cell phone, so she left her mom a note telling her of the plan to go to her granddad’s and that she should call when she got home from work.

“She called me but I do not remember that conversation for the life of me,” Haley said. “I don’t remember if I told her I loved you, we always said that like every time we’d get off the phone, ‘I love you, bye.’” That next day her mom was supposed to have a rare day off work, so she was going to come to Lewisport too, to hang out with her dad and Haley and the rest of the family while they grilled out and played in the pool. That day no one could reach Crystal, but they thought she might just be exhausted from working 12 hours the day before. “We hadn’t heard from her all day so we started worrying something’s not right,” she said.

Despite not having a phone, Haley downloaded an app onto her iPod Touch where she could watch ads and get a couple of free minutes for a phone call through the internet, so she tried to reach her mom through that internet number. “I tried calling her and leaving her a voicemail saying please just let me know you’re OK, please just answer, and I never got an answer from her,” she said. “So I fell asleep crying that night, I remember, because just the thought of something happening.” “And then the next day I woke up and I heard somebody laughing, like hysterically laughing,” she said.She went out and asked Danny what was so funny. “He said, ‘It’s your mom,’” she said. “And that’s when it hit me that he was not laughing, that’s just how hard he was crying. And I knew.” Her mom had apparently just died for no obvious reason.

“What it says on the autopsy is assumed cardiac arrhythmia, so that just means her heart just went out of pattern, she passed out and she died, that was it,” she said. “It’s kind of like a mystery. I still feel like I don’t really know everything, but maybe there’s not more to know, so who knows.” With her father out of the picture and her mother gone, Haley and her brother moved to Lewisport to live with Danny, but that meant she’d be starting a new school in about a week.

“It was just chaotic,” she said. “I just remember I was so nervous and I remember I got lost on my first day and I started crying. “But I made friends pretty quickly. Everybody was so nice and they reached out to me and showed me where all my classes were, so they helped the transition a lot,” she said.

Always an athlete, playing softball, basketball, cheering and playing volleyball at Breck County, she picked up where she left off and played basketball and volleyball at HCMS. “I love volleyball,” she said. “I’ve been playing for years so that is my best sport.” She was an outside hitter on the team, where she excelled, and soon volleyball took precedence over the other sports.

“I ended up giving up basketball because I was asked to play on a national volleyball team,” she said. “We had tournaments in Tennessee, we played in St. Louis, and our nationals was actually held in Florida. But club ball is very expensive so I only got to play one season of it.”

She was starting varsity as a freshman, and lettered all four years. Things were going well in Hancock County, where her grandparents didn’t have the constant stress over money or the struggle to provide things for her like her mom had. “Now I’m like I would take back all the materialistic things if only I could have her, but obviously I can’t do that,” she said.

Haley excelled in scholastics too, maintaining a high GPA and taking courses at Owensboro Community & Technical College, while still staying involved at the high school. “I’ve always been really involved with Beta Club. I love Beta Club and just like trying to be active in the community, volunteering and that kind of thing,” she said. “And then for this school year I was actually elected to be the Beta Club president, so I was super excited about that and I was kind of sad that that got cut short because there were still some service projects that I wanted us to do.”

She works at Crossroads IGA in Lewisport, so keeping up with school and work began to wear her down and she was looking forward to spring break in late March. Her grandfather Danny had been diagnosed with lung cancer in May of 2019, and although the prognosis at the beginning was dire, she had hopes that he would beat the odds. As he took a turn for the worse, doctors didn’t offer a bright outlook.

One Tuesday in early March Denise woke up Haley and her brother with news that Danny was going to the hospital again. “She said the reason I’m waking you all up is because I’m taking Papaw to the emergency room and this might be the last time that you all get to see him,” she said. “So I went in there and his skin was all yellow and I just couldn’t help but cry because I just didn’t understand how it went so bad so fast. But I did get to tell him that I loved him.”“With my mom I’m not even sure that I got to tell her that I loved her,” she said.

Because of the virus shutdowns, no visitors other than spouses were allowed at the hospital, so Haley couldn’t visit him, but the news got quickly worse when doctors said he wasn’t responding to their treatments and had very little time left. “We actually tried calling in Hospice,” she said. “Because of everything being so kind of odd, we wanted the other family members to get to see him one last time before he passed. “We had the furniture in our living room moved, the hospital bed was supposed to be at our house at 4 o’clock, Papaw was going to be there at 5 o’clock. We had it all planned,” she said. “And then I want to say about 1 or 2 that afternoon we got the call that he didn’t make it.” It was another big loss in Haley’s short life.

At the same time she was suffering another loss of sorts, without knowing it was coming. Schools had been closed temporarily beginning on March 16, just two days before her granddad died. The closure would last through spring break, when students were set to return. They never did. “We didn’t know that that last day was the last day that we would be students at Hancock County High School,” she said.Things that most teenagers count as constant and permanent – having a mother, a grandfather, and even going to school – had all gone away.

But despite plenty of chances to give up or to feel sorry for herself, Haley has pressed on. “When my mom first died I had so many questions and I really just did not understand why that had to happen and so there would be so many nights where I just could not go to sleep because my mind just would not shut off,” she said. “And so for a while, I was just so sad all the time. “But eventually I just told myself this is not going to help me in any way. I need to start using losing her as motivation I guess to achieve all my dreams and make her proud.” She hasn’t shut off the world, she’s just found ways to deal with its realities.

“I think it could’ve been very easy for me to put up those walls but I just kind of told myself to just keep going and keep myself busy,” she said. “But there are days when my mind starts wandering and I do get sad and still just not really understand, how does somebody lose so much?” “Of course my Papaw, he was very strong in his faith, so I’ve stayed in church and been a part of our church youth group and that’s helped a lot,” she said, “and as I’m older I’ve realized that sometimes we don’t always understand the reasoning behind things but there was reason for it.”

“I keep this quote with me, it’s actually just a quote that I saw on social media, on Pinterest, but it said ‘life is tough but so are you,’” she said. She’ll be graduating with honors on May 26 in a drive-thru graduation, and she intends to keep the same determination looking toward the future. “I have very high expectations for myself, but I guess that’s just because I know that I’m capable of making that happen,” she said.

She plans to become an OB-GYN. “I’ve always just been fascinated by women having the ability to give life,” she said. “It’s just something that I’ve always found interesting and the more that I’ve read about the more I’m just like I can really see myself doing that in the future.” She’s also going to minor in Spanish, since she’s already completed AP Spanish in school, and it will help her land a job more places.“Hopefully in about 10 years I’ll be an OB/GYN and I’ll know Spanish,” she said.