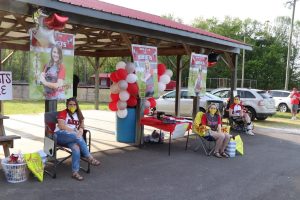 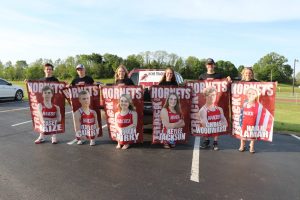 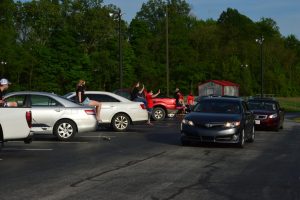 Hancock County High School seniors will be graduating from their cars next Tuesday, followed by a roving parade, but the modified graduation plan means strict rules for students and spectators due to the COVID-19 pandemic.
A “community graduation parade” will be held instead of the traditional ceremony, in order to keep everyone separated and stop the spread of the coronavirus, which also closed the schools from March through the end of the year, and awards will be brought to students at their cars.
“Galaxy has donated a whole bunch of pizza boxes and I think we’re calling it ‘graduation to go,’” said Hancock County High School Principal Ashley Gorman. “We’re putting all their awards in there.”
The makeshift ceremony will begin at 5:30 p.m. at the high school parking lot, where awards will be announced and given out, and then the parade will commence at 6 p.m.
The line of cars will leave the high school parking lot and wind through Windward Heights subdivision before turning east onto Highway 60. The parade will then turn onto KY 3101 into downtown Hawesville, where the cars will follow the traditional Christmas parade route down Main Street.
Then the cars will go up Town Hill back onto Highway 60 toward Lewisport, where they will turn north at the stoplight onto 4th Street. At the four-way-stop at Pell Street the parade will go left through town before turning south onto Morton Lane and back to Highway 60, where the parade will go east to return to the school.
While the event is called a parade, Gorman said it must necessarily be different than most parades due to health restrictions.
“People cannot line the parade routes like they do when there’s a parade,” she said. “Everybody has to stay in their yards… We’ve got to make sure that we promote that everybody’s following guidelines and that everyone is social distancing. That’s the only way we’re going to be able to do it.”
“Hopefully we’re going to be going through an area where your family will be able to see you from their driveway or from their yard,” she said.
Group restrictions extend to families who want to watch the awards at 5:30. The only people allowed to come are the ones who are in the car with the senior.
“So whoever of your family doesn’t fit in the car with you is kind of going to be watching this event from a distance, or potentially watching the video when we can put that out to social media, or seeing those pictures at a later time,” she said.
There will be some decorations, Gorman said, because after all, it is a parade.
“We just told them just to decorate their caps like they normally do, because they’ll wear their caps and gowns, and if they want to and mom and dad will let them, to decorate their family car,” she said.
Students will miss out on most of the traditional graduation memories, but they will still be able to walk the stage, albeit in a modified way.
“At the end of that parade we’re going to come back to the high school and they’re going to be able to walk across the stage and get their diploma and get a photo,” Gorman said.
But even then visitors aren’t allowed unless they rode in the same car as the graduate.
“Whatever of your family is with you, they’ll be able to experience that part,” she said. “But as far as being able to say people are invited to the high school parking lot or bus loop or middle school parking lot to watch that from a distance, we cannot do that. That is against the CDC guidelines.”
Tuesday’s event is commemorating graduation, but the school has hopes of holding a more traditional ceremony in the near future.
“We’re still trying to hold out for a date later in the summer that we would get to have a traditional graduation ceremony,” Gorman said, “but if something happens and we are not allowed to gather groups of people by end of July, beginning of August, then this is our alternative to that.”
dave.hancockclarion
@gmail.com