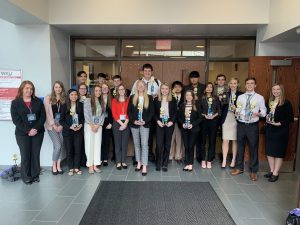 Hancock County FBLA members traveled to WKU on Friday, February 28th and competed in 22 events in which they qualified for state competition in 15 of those events. Five members earned 1st place awards, six earned 2nd place and four earned 3rd place. One of our 1st place winners won a $500 scholarship to WKU. For a small district chapter, HCHS is doing quite well.  Our wins were only surpassed by substantially larger schools with more members who compete in more events.  The event we attended was the annual Region 1 Leadership Conference.  Kendall White was re-elected to Region 2 Treasurer and plans to run for state president at the State Conference in April.  Members who won 1st, 2nd, or 3rd place in an event or test, qualify to compete at the state level at the Galt House in Louisville, KY.