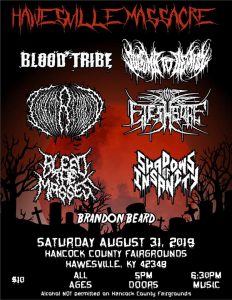 Friends Jonathan Rice and Phillip Lawson came up with the idea of the concert to bring the music they love, and make, to people who might not have been exposed to it before.

The two are members of the death metal band Shadows of Insanity, and they’re bringing seven acts to the fairgrounds for a night of very loud, aggressive music.

“It was first going to be on my farm, but then we got to thinking we may not have enough electrical power to do it there,” said Rice.

They already had four bands lined up, so they called the fairgrounds and rented the place for the last Saturday in August, so the planning kicked into overdrive.

“We couldn’t imagine this many bands are going to come to little Hawesville, Ky.,” said Lawson.

The lineup includes: Brandon Beard, from Tell City; Shadows of Insanity; Fleshbore, out of Indianapolis; Bleed the Masses, from Evansville; Insectriarchy, from Evansville, Succumb to Demise from Lexington; and Blood Tribe, out of Evansville.

All of the bands play death metal, which is similar to speed metal or thrash, but heavier.

“And it’s really heavy sounding guitars, like really tuned down,” said Rice. “And the bass is really I guess you could almost say muddy sounding. And a lot of double bass on the drums.”

Unlike lots of scream metal, there’s no high pitch screaming.

It’s the kind of music fans of Metallica, Megadeth and Pantera will like.

Lawson and Rice wanted to bring the show here because it’s not usually available in the area.

“You can’t get metal bands like this to come around here,” said Lawson.

In their band Lawson is the vocalist and Rice plays guitar, while Rice’s fiancée Breann Groves plays keyboard and Jesse Harris plays drums.

The band is new, but Rice and Lawson have been playing together for going on 10  years, when they met while working together at Wal-Mart in Tell City.

“We started playing our very first practice inside my barn,” said Rice. “It was pouring down rain that day and it was kind of cool that day too. It was a little chilly, but we played anyways.”

They continued to make music together and with others before coming together with Groves and Harris, where the group is finding its footing.

Hawesville Massacre is a way to spread their love of the music to new people, but the two acknowledge that some will look down on the music and the ones who make it because the lyrics tend to focus on death and murder.

And the dark subject matter might worry others who think that all death metal is satanic or otherwise evil.

“I just want people around here that are churchgoers to understand that hey, we’re not trying to bring evil to the county. Believe me, we’re not,” said Rice.

“I am a Christian person, I am of Jesus Christ,” he said. “He’s my Lord and Savior. I would die for him, but I just love my heavy metal music.”

“My music don’t reflect me, it’s almost like a horror movie, you can put it like that,” he said.

While they’re fighting to get their music heard, the two say they’re also fighting the occasional naysayer who says they should quit music and get on with normal careers.

“(People) would tell me hey, you’re lazy because you don’t have a regular job, like a factory job,” Rice said. “Actually no I’m not because I’m giving up a lot of things to do this.

“Not that I’m knocking down hard work, I’m not,” he said. “But I wouldn’t mind seeing more people pursue their dreams instead of just doing what they have to do.”

“Don’t be scared to go out there and take a chance,” said Rice. “If you fail you can always come back and get that 9-5 job.”

Tickets for the Hawesville Massacre are $10 and will be available at the door. Doors open at 5 p.m. and music starts at 6:30 p.m. and will run to around midnight.

See this week’s Hancock Clarion for the story